I made a Bruce Trail reconnaissance run back in January, and since then we’ve been waiting for the right combination of snowpack, weather, and coach availability to bring our BJAMS group for a trip down the Bruce.  A couple weeks ago, the forecast began to suggest that the snowpack was just going to continue to build through March, so we decided to bide our time.  Indeed as the forecast suggested, this “powder week”, with between 30 and 50 inches of snow at the Northern Vermont resorts along the Green Mountain spine, has bolstered base depths.  One result of all that snow has been the growth of the snowpack at the Mt. Mansfield Stake; it’s finally crept above average this week, reaching a depth of 82 inches as of yesterday.  With excellent snowpack now all the way down to the mountain valleys, a forecast for partly cloudy skies with temperatures around 30 F, and good availability of the BJAMS ski program coaches that wanted to ski the Bruce… today was the day for our trip.

We had a little time before our group got together, so we did a warm up run on Sunny Spruce with Connor and his dad.  As expected, the snow quality was excellent – it was packed powder on the trails and powder off piste, with just a few bare spots here and there on steeper south-facing terrain like Freddie’s Chute.  One of the highlights of that run was West Slope, where we rode the ridge along the skier’s left with big swooping drops into the chowder on the left side.  At one point I heard Luke screaming out behind me something like “That was so intense!” after launching a huge drop on one of his turns… intense indeed! 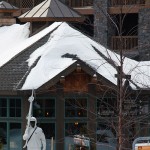 We gathered up our group, which featured Claire, Ken, Julia, Luke, Ty, Dylan, and me.  Along with Joana and big Luke, we were missing Joe, Sam and Ethan today, and I suspect they would have loved to make a run down the Bruce, but hopefully they’ll get to do it next time.  Apparently Joe did have a great day out on the mountain on Friday with Ken though, so he’s had a good dose of all this new snow.  We debated briefly about whether we should do our Bruce run at the beginning of the day or the end of the day, but with some folks having obligations preventing them from lingering at the mountain too long at the end, we decided that we’d better start with the Bruce and fill extra time in with some other runs at the end of the day.  Based on my reconnaissance day, I was going with a fairly conservative estimate of two hours for us to complete the run to the base of the Bruce.  I knew there wouldn’t be any problems for anyone in terms of the skiing, I was just unsure about what our pace would be through the flatter terrain in the Nordic areas.  If the kids found it tiring it might take longer than what I’d experience on my own, so I figured it was better to be safe than sorry.

We didn’t waste any time getting to the top of the Bruce, we crossed on the Over Easy and went right up the Fourrunner Quad.  Unlike down in the base elevations, there was a brisk wind up there around 3,600’.  Some of the boys dropped in the alternate entrance to the Bruce for a bit of powder and I grabbed a few pictures there and some more as they dropped below me on the trail.  It was packed snow on the trail, but the quality was excellent, far better than what I’d experienced on my January trip, which was after a thaw the previous week.  The skiing in the upper sections went pretty much as expected, the boys were having a blast with the bumps and jumps, and one could explore the powder off to the sides when areas opened up in the trees.  A few of the steepest pitches were a little scraped down in spots, but that was pretty minimal because of the deep base and recent snow.  As we got down into the hardwoods and the forest began to open up even more, I started venturing father off the trail into powder lines based on my previous knowledge.  The powder was generally a foot plus in most places, and that worked well on most pitches – enough to slow you down on the steeper stuff, but not bog you down too much in the mellower areas.  Down on the Nordic trails, the final, flatter part of the descent went very smoothly.  Ty noticed one of those wavy green lines one of the trail signs, indicating beginner Nordic terrain, and with regard to the perceived flatness he said, “Oh no, that type of sign is never good!”  I’d say he found out that it really wasn’t that bad.  The kids did a nice job of keeping their pace on the flatter areas, and I’d give Ty and Dylan occasional boosts to keep their pace up.  They started to play around and get tangled up with each other as they skated and poled their way down the trail, so that kept them entertained even on the flats.  As a bonus we got those beautiful views of the snowy Ranch Brook, and the snow stayed quite powdery all the way down to 1,000’. All in all that had to be just about perfect conditions today for skiing the Bruce, comfortable temperatures, partly cloudy skies, and dry snow all the way to the base.  I’m not sure what more one could ask for aside from getting first tracks!

From leaving the Spruce Peak Base to reaching the bottom of the Bruce at Route 108, it had taken a bit under 90 minutes, so we made it well under my two-hour conservative estimate, even with the large group.  We were about 20 minutes ahead of the next Mountain Road Shuttle when we reached the end of the trail, so we popped into Notchbrook Convenience Store for some snacks, and enjoyed the early spring weather while we waited.  The March sun is quite nice right now, and it’s the beautiful sort of weather that is keeping the snow dry instead of sticky, even with relatively warm air.  Ty and Dylan loved the ride on the shuttle, and Ty only half jokingly insisted that “The Bruce was nice, but it’s the bus ride that’s really my favorite part of the trip.”  He certainly does like to ride buses.  For a representative GPS/Google Earth map or elevation profile plot of the travel circuit we used to ski the Bruce Trail, refer to my Bruce Trail trip report from January 21st.

When we arrived back at the Spruce Peak Base Area, we had another hour or so before the lifts stopped running, and we decided to use our remaining time for a trip over to the Sensation Quad.  With the relatively deep March snowpack, it seemed like a good time to ski as much of Spruce Line as we could.  The strengthening sun is only going to start beating on that south-facing terrain more and more.  I was surprised to find that the steep terrain above Green Acres was fairly wind scoured, but we found a line through and the boys did some great steep turns and jumps off one of the rocks there.  Dylan led the charge with an impressive jump turn off the rock, landing in a sea of deep powder.  He was followed up by the other boys, including Luke who was totally jazzed at how high he went.  That steep pitch used to intimidate him, and now he’s launching huge jump turns off boulders into powder.  It’s great to see him expanding his skiing literally by leaps and bounds.  Ken launched a beautiful air off the rock as well, although he had to deal with sloppy fourth or fifths in terms of the powder on the landing.  The snow in Green Acres was excellent – powder of well over a foot in depth, which was plenty to slow you down in some of those tighter tree lines.  We couldn’t ski all of Spruce Line because parts were closed, but we did get the middle section that was fairly lightly tracked with some beautiful snow.  The group also enjoyed the chance to ski Main Street since there weren’t any races taking place – having Main Street open up for general traffic is one of those great things about approaching the spring season at Stowe.

“The Bruce was nice,
but it’s the bus ride
that’s really my
favorite part of
the trip.”

While most of the group had to leave a bit early, Ty, Dylan, and I found time to squeeze in one more run on Sunny Spruce.  We dropped into Freddie’s Chute, and Dylan worked his way to the woods on the skier’s right for some powder.  He ended making an impressive drop off a log, which had to be 8 to 10 feet high.  He did manage to hit his chin with his knee on the landing, and it wasn’t of any consequence, but I did stress the point of being aware that that can happen and making sure that your tongue is not anywhere near your teeth.  That was really an aggressive drop that he made, and between Bolton yesterday and Stowe today, he’s really been on fire with the airs this weekend.  With deep bases and deep powder though, ‘tis the season for such things.  We followed that up with some exploration of the trees off to the skier’s left of Lower Smuggler’s – a section that none of us have ever explored before.  We found some good lines, with just a bit of a slow exit on flat terrain.  We finished off with a final descent down West Slope, making use of that ridge and flying off the edge into the powder.

I just checked the forecast, and we’ve apparent got more snow on the way this week.  Nothing too big is expected, but the mountains often seem to do a lot with just a little moisture in the forecast.  Indeed this is turning out to be quite a March for skiing in the Northern Greens as we make up for the rather paltry snowfall of January and February.