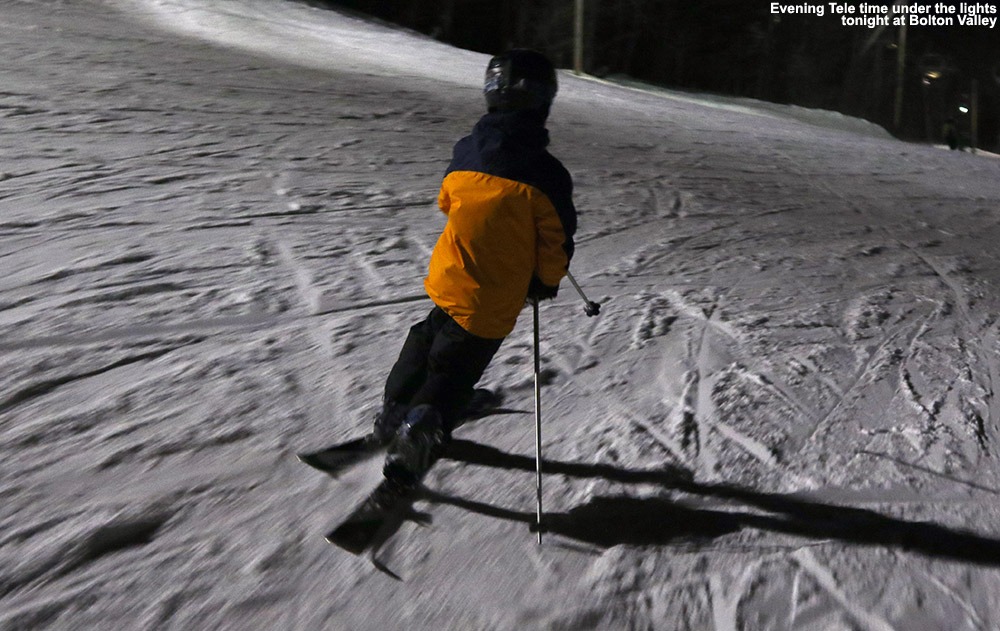 We had some snow earlier in the week, but there hasn’t been much in the past few days and we weren’t in any rush to head off to the mountain early today. Temperatures were pretty nice though, approaching the freezing mark in the valley, so we did want to get out for a few runs. We also thought that it would be nice to get Ty and Dylan out for some Telemark skiing since they haven’t been out on the groomed slopes for Tele practice in a while. As we took care of everything else during the day, we eventually decided to make in an evening session up at the mountain under the lights.

We headed out around 6:00 P.M. and found temperatures in the 20s F up in the Bolton Valley Village. We’re expecting a bit of snow tonight with a weak system passing through, and while there wasn’t any sign of incoming snows when we first arrived, as soon as we made our initial trip up the Vista Quad we started seeing flakes. The intensity of the snowfall increased as we headed up toward the Vista Summit until it was a steadier light snow up there. Winds were light, so it was pretty comfortable overall even up in the higher elevations.

As soon as we hit the first pitch on Sherman’s Pass, everyone started remarking about the strange snow surface underfoot. We actually didn’t know what we were going to get this evening; it had warmed up above freezing earlier this week for the first time in a long time, and we didn’t have a feel for what had really gone on in the mountains. If it did going above freezing, it must have been very slight, because there was no sign of any effect on the snow surfaces. The groomed surface was very much midwinter, and when I headed off trail, everything was dry and powdery. So, we couldn’t figure out what was up with the snow on the trail. We all felt it had a strange consistency, but couldn’t put our fingers on what it was. I think it might have been the way that the loose snow on top that had been kicked up by skiers wasn’t bonding to the groomed snow underneath, and it felt like it made you slide out a bit as if you were on ball bearings. Everyone felt it, and indeed it’s been a while since we’ve been out on groomed slopes with our Telemark skis, but it was a surprising experience. For me personally it was my first time back on my RT-86 skis in a couple of months since I was having a warranty repair being done on one of the toe pieces. I’d forgotten how light those skis are relative to my other pairs. Also, with the way the snow has been and the type of skiing we’ve been doing, it was my first time on skis much under the ~100 mm waist range in a while, so that took a bit of adjustment. As I gradually got used to the snow I was reminded of how snappy the RT-86 is on turns.

We just did a few runs, and it was a nice evening for turns. E’s toe that she’d injured was feeling pretty good, and she had definitely been worried about putting stress on it via toe-bending Telemark turns. Ty was feeling good, but Dylan was struggling somewhat with his turns and it was evident that it had been a while since he’d been on his Telemark skis. He definitely improved with each run though, so he was starting to get back in the groove. Both boys had a lot of fun doing 360 spins on the trail, and the snow conditions really lent themselves to it. We’ll be watching for some additional evening opportunities not that the weather is warmer, because it was definitely good for the boys to get out for some groomed skiing on the Teles.