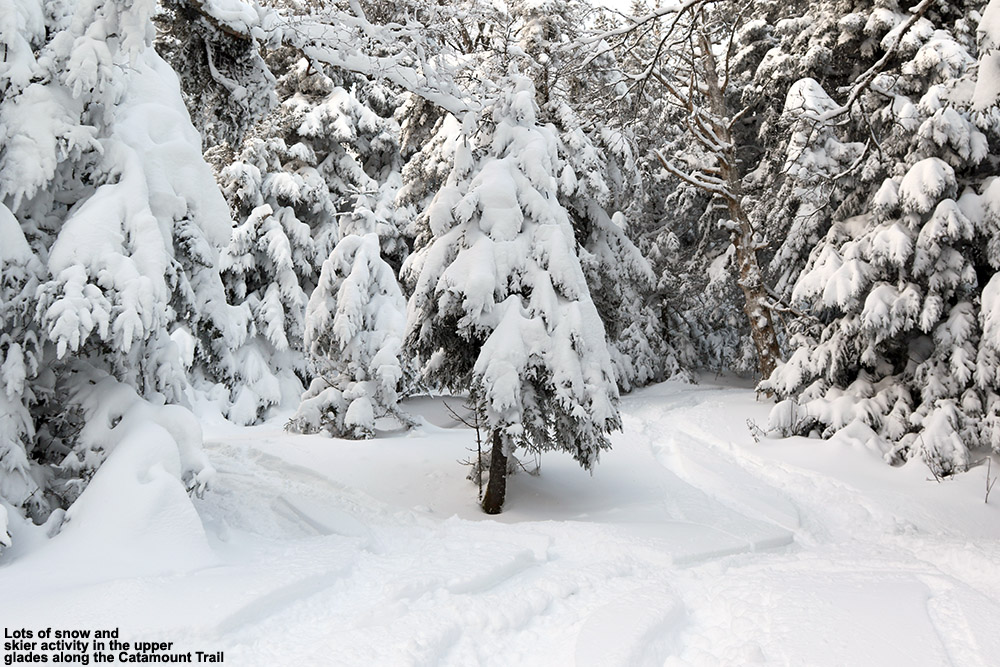 This is opening weekend for lift-served skiing at Bolton Valley, but with only minimal terrain served by the lifts at the moment and fairly chilly temperatures in the forecast, I decided to make it my first visit of the season to the Bolton Valley Backcountry Network.  Although we haven’t had any big storms in the area in the past few days, we’ve had some lake-effect snow from the Great Lakes and additional snow from an arctic frontal passage that has given the mountains additional bouts of snow almost every day.  The Mt. Mansfield Stake is indicating a snowpack depth of 34”, and it’s definitely not just fluff.  With the high elevation and maintenance that goes on in the Bolton Valley Backcountry Network, I’ll usually feel OK poking around on appropriate terrain once the stake kits 24” (depending on the composition of that 24”), so with 34” I figured it would definitely be ready to go.

I headed up to the mountain in the afternoon, and temperatures in the Village at ~2,000’ were in the mid-teens F, but fortunately there was minimal wind.  There was blue sky at times, but light snow was still falling off and on.  My goal was to head to the upper glades along the Catamount Trail out past the resort boundary.  Those glades are up around the 3,000’ elevation, so I suspected the snowpack would be more than sufficient.

I headed up the usual Bryant Trail, and the most interesting thing I saw was that there are some new structures going up around the Bryant Cabin.  One structure looked like a shed of sorts, and there was a larger structure that seemed to be partially built.  It also seemed that there had been some work done on the cabin itself.  In terms of snowpack depths, down at the Village at 2,000’ the surface snow was generally 14-15” of powder over a fairly thin layer of base snow.  Up at the Bryant Cabin at ~2,700’ there was 16-17” of powder over a much more substantial base, and when I finally got up to ~3,000’ in the glades on the back side of Bolton Mountain there was a healthy 18-20” of powder.  I was able to punch through the base at one point in my measurements, and the base snow seemed to be in the 8-10” range.  So, that would put total snowpack depths up at that elevation approaching the 30” range, which seems pretty reasonable with the Mt. Mansfield Stake at 34”.

“…when I finally got up to ~3,000’ in the glades on the back side of Bolton Mountain there was a healthy 18-20” of powder. I was able to punch through the base at one point in my measurements, and the base snow seemed to be in the 8-10” range. So, that would put total snowpack depths up at that elevation approaching the 30” range…”

The skiing was generally excellent, especially in those upper glades.  Since it was afternoon there had certainly been some traffic up there, but I still found areas of fresh snow.  I made my way down via Gardiner’s Lane, and eventually decided to check out the Alchemist glade that I hadn’t visited in a while to the south of Gotham City.  It’s a south-facing glade, so conditions can be quite variable, but aspect almost doesn’t matter right now because we’ve had November/December sun over the past couple of weeks… and not much of it anyway, so south-facing terrain isn’t all that different from north-facing terrain.  One does have to watch out as they get down near 2,000’ though because the base below the surface snow does start to get pretty thin, so you don’t want to ski anything with many obstacles at that point.  One could easily just lap terrain up above 2,500’ though with minimal concern about base depths.  Skiing is definitely quite good up high right now.

There was a bit of accumulation of snow on my car when I got back to it after the tour.  It was rather minimal though, about ¼“ of new after 2 to 3 hours away.  Currently, Winter Weather Advisories are up ahead of our next storm that is coming into the area tomorrow.  I signed up for Washington County weather alert texts through VT-Alert, so I was notified of our Winter Weather Advisory just I was finishing up my ski tour today.  It was definitely nice to get that heads up right away without having to actively check, and it really doesn’t matter where you are.  Anyway, the advisory calls for a general 4-7”, which seems pretty consistent with what’s been expected of this event for a few days now.