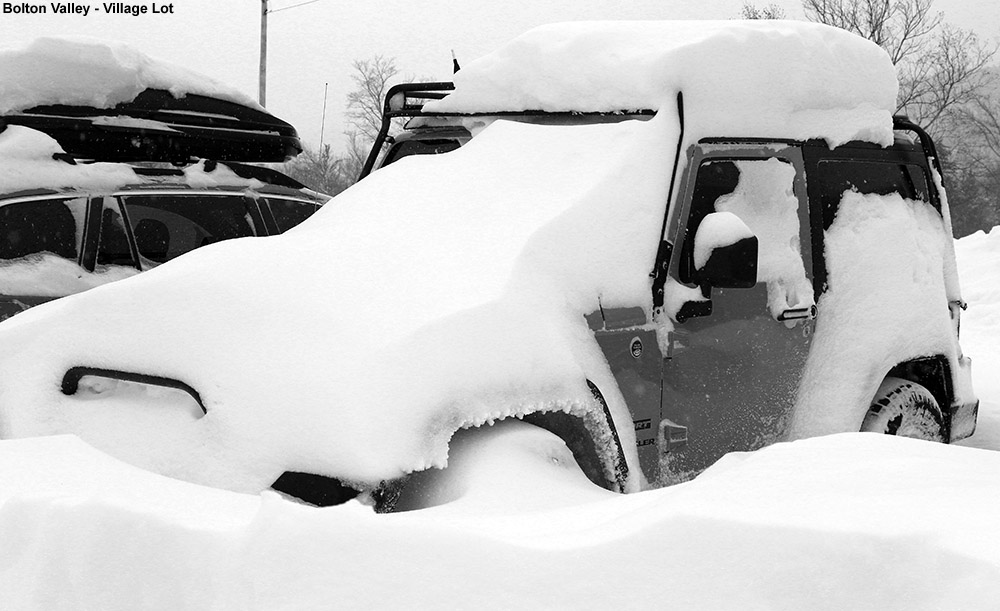 Snow totals from Winter Storm Stella were in excess of four feet at the resorts of the Northern Green Mountains, and Bolton Valley topped the list with an impressive 58 inches.  It wasn’t just the mountains that made out well from this storm cycle though, it left 41 inches of snow at our house, which trumped the 2007 Valentine’s Day Storm to become the largest storm we’ve recorded since we moved here.

Not wanting to miss the chance to check out all that new snow up at the mountain, I headed up to catch a few runs this morning.  The potency of the storm was immediately evident as I saw some of the vehicles that had been parked in the Village parking lots over the past couple of days – they were buried in deep drifts, and some were barely visible.

“ I stuck my measurement pole into the powder up top there and it went all the way up to the handle – that’s a depth somewhere north of 40 inches.”

I got in line for the opening of the Vista Quad, but the lift operator felt that it was going to be on wind hold for a bit, so I headed up Snowflake and was happy to find that Timberline was already open.  On the way over I cut the traverse over to Tattle Tale, and with two to three feet of snow in the way it took a good deal of effort.  I found Tattle Tale untracked, and the powder very deep.  There were also pockets of super light powder scattered among slightly denser snow, and when you hit one of those pockets, any support you found in the powder would simply disappear as if the floor was dropping out on you.  I had on the fattest skis I own, with 115 mm width at that waist, and even that couldn’t stop the free fall in that snow.  On my first encounter with one of those pockets, I quickly went over the handle bars on my Tele skis and had to extract myself from the deep powder.  The snow was so deep that even with my fat skis combined with the steepest pitches, I had to straight-line it.  I didn’t get to make many turns there, but it was definitely a neat experience. 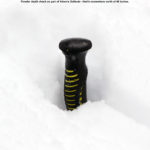 I stayed at Timberline the entire morning, and found great turns on Twice as Nice.  It was actually nice as the powder started to get chopped up a bit, because you could keep plenty of momentum going to hop in and out of the untracked areas.  The turns were simply fantastic all around though; Winter Storm Stella definitely provided one of the more thorough resurfacings I’ve witnessed around here.  Since the storm dropped over 2 inches of liquid equivalent down at our house, you know the mountains were well above that.  I did a run on Adam’s Solitude, and it was my first visit there in quite a long time.  I opted for the Secret Solitude option, and got first tracks down one of the lines with a number of small cliffs.  At the top of that section I contoured across the hill, and with the pitch of the slope, the powder was up to my shoulder.  Adam’s Solitude is famous for catching some well-protected powder, and the depth was very impressive.  I stuck my measurement pole into the powder up top there and it went all the way up to the handle – that’s a depth somewhere north of 40 inches.  After seeing that, I knew I could just straight line my way right down through the ledges, and that was indeed one of those lines where the snow is just up and over your shoulders.

By the time the morning was over, the Tele turns had cooked my legs and my body was craving some food, so I stopped in for a burrito at South of Solitude.  I kicked back and did some browsing on my phone while I ate, which seemed to be a popular option for the handful of folks populating the lodge. The Vista Quad was running by the time I got back to the main base, but my legs had definitely had their workout, so I skied down to the car and headed out.

In general, most areas I found offered up powder in the 24 to 30-inch range, similar to what we found at Stowe Yesterday.  There are no major warm-ups in the near future, so we should have some excellent conditions going into the weekend.