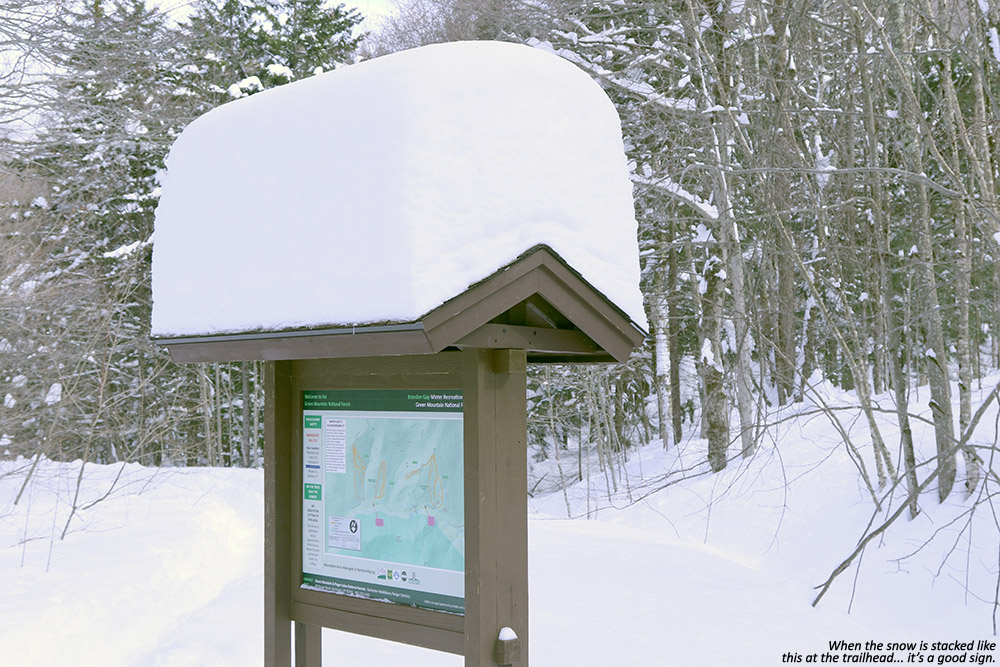 At Brandon Gap, about an hour or so south of our house in Waterbury, the Rochester/Randolph Area Sport Trail Alliance (a.k.a. RASTA) has done something very special.  They’ve created the Brandon Gap Backcountry Recreation Area, a network of trails for backcountry skiing and riding in the Green Mountain National Forest just south of Vermont Route 73 at Brandon Gap.  The area has over 16,000 vertical feet of skiing and riding on numerous glades spread out along three miles of the Long Trail.  What makes the Brandon Gap Backcountry Recreation Area so special is that unlike the typical clandestine backcountry areas that skiers have created throughout Vermont, the area at Brandon Gap was actually created in partnership with the United States Forest Service,  It truly is a pioneering project showing that the development of backcountry ski terrain can be done in a legal, legitimate, and sustainable way.  The only other area for backcountry skiing that I know of around here that would be somewhat comparable would be the Bolton Valley Nordic and Backcountry Network, which is associated with Bolton Valley Resort.

“Imagine more than 30 inches of feather-light champagne powder, and enough pitch to do it justice, and that’s what was going on at Brandon Gap today.”

The RASTA backcountry ski trails at Brandon Gap have been in the news for a while, and as soon as I first heard about them, I was eager to go on a tour and check them out.  It’s not always easy to find an appropriate hole in one’s schedule that coincides with great snowpack and conditions though, so it’s taken a while to get me down there.  I had time in the afternoon today though, and even though I was busy at work longer than I’d expected, I was still able to make it down to Brandon Gap.

Although I didn’t know exactly how much snow the Brandon Gap area had picked up relative to the rest of the state, everyone has been getting substantial snows due to the remnants of Winter Storm Skylar.  Ski resorts in the northern part of the state have picked up as much as six feet of snow in the past week or so.  I could see that there wasn’t much to worry about at Brandon Gap when I caught sight of the massive stack of snow atop the map sign at the trailhead.  The snow situation was looking very good.

I was somewhat short on time, so I opted to tour in the No Name Backcountry Area today.  You really can’t ask for much easier access to great backcountry skiing.  For the No Name area you literally hit the trailhead, and within moments you start going right up on your ascent.  The skin track is nicely interwoven among the various glades in the area, so you can get a look at a lot of the potential ski options.  The skin track is well established, beautifully laid out, and extremely well marked with RASTA blazes and directional arrows.  I’ve never seen a skin track so clearly marked, it’s just one of those things about the area that make it so efficient and professional looking.

“We’re talking “hold onto your head as you descend because this is going to blow your mind” type of conditions.”

The ascent was extremely pleasant with such a beautiful skin track underfoot, and before I knew it I’d reached the top of the area where I found a nice packed out area for de-skinning, and another copy of the map displayed.  I didn’t know exactly what to expect on the descent, but my depth checks on the way up had revealed that there was more than 30 inches of absolutely feather-weight powder covering the base snow.  In many cases that would simply be too much snow, since you need some rather steep pitches to accommodate it, but that wasn’t a problem in the No Name area – the pitches there are generally at least black diamond. 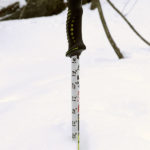 With my gear set for the descent, I headed off to skiers left where I’d seen a glade that was essentially untracked.  I dove in, and the powder skiing was simply insane.  Imagine more than 30 inches of feather-light champagne powder, and enough pitch to do it justice, and that’s what was going on at Brandon Gap today.  We’re talking “hold onto your head as you descend because this is going to blow your mind” type of conditions.  Wow, just… wow!  One of the more fun aspects of the descent was simply adjusting the pitch of my front leg in my Telemark stance to determine how much of my body was under the snow and adjust my speed.  You know the snow is deep when that’s your main mechanism for controlling your speed.  Got fat skis?  Good, you’ll want ‘em.

It’s so funny how different the snow was today compared to the dense snow yesterday at Bolton Valley, but that’s the way storms go.  Sometimes you have the right conditions in the dendritic grown zone to produce those massive, fluffy crystal, and sometimes you get small, baking powder flakes.  Brandon Gap definitely got the goods over the past few days.  It looks like we’ve got cold, midwinter conditions going into the weekend however, so the current state of the snow should be maintained for everyone getting out to enjoy the bounty of the recent big storms.