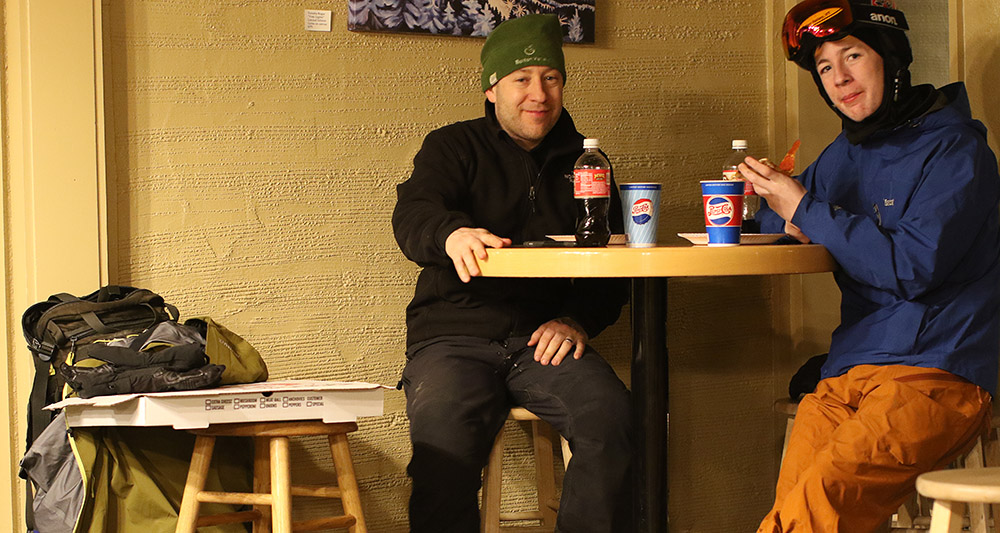 Ty and I headed up to Bolton Valley for a few runs this evening to catch up with my friend James and his kids Jack and Lizi.  James is one of the chaperones for their school’s ski program, which has their sessions on Thursday nights at the resort.  They’ve actually had some great Thursday nights so far with respect to conditions.  They had a couple of nice days before the holidays, and they scored again tonight as well with the resort reporting 6 inches of new snow as of this evening.

Up at the mountain we quickly caught up with James and made a run off the Vista Quad.  Like my tour at Timberline this morning, the overall weather was quite nice.  Temperatures were well up into the 20s F, and another bout of snow had come in for the evening to further freshen up the slopes.  Wind was pretty minimal as well, except for up near the Vista Summit where it was howling at times.  The off piste was actually a bit better than what I found this morning, presumably due to some additional snow, but the groomed areas were really what I found to be impressive.  You could still find scratchy areas, but a lot of new snow had been groomed into the base, and combined with the additional snow that was falling and had been pushed around by skiers, there were some really soft zones of snow throughout the available runs.  The steepest slopes like Spillway weren’t open, which is probably a good idea with respect to safety, since that very firm subsurface is still sitting there lurking under the new snow.

“…a lot of new snow had been groomed into the base, and combined with the additional snow that was falling and had been pushed around by skiers, there were some really soft zones of snow throughout the available runs.”

We caught up with Jack and Lizi for a final run off the Mid Mountain Chair, and I was surprised to see that they headed right down Beech Seal vs, the easier Bear Run route.  They get an hour of ski lessons on each of their program days, and it’s obvious that they’re really coming along in the way they easily tackled Beech Seal.  I could tell that Jack was clearly comfortable by the way he flashed me a peace sign as he buzzed the camera while I was shooting photos.

James and the kids had to head out around 8:00 P.M., but Ty and I went for one more run off the Vista Quad before retiring to Fireside Flatbread for some pizza.  We’d snacked at home a bit earlier, but we’d definitely been saving space all evening for some of their great pie.

It looks like we might have another small system coming through on Saturday night into Sunday, and then there’s the potential for another couple of larger systems midweek, so conditions may improve even further over the next several days.