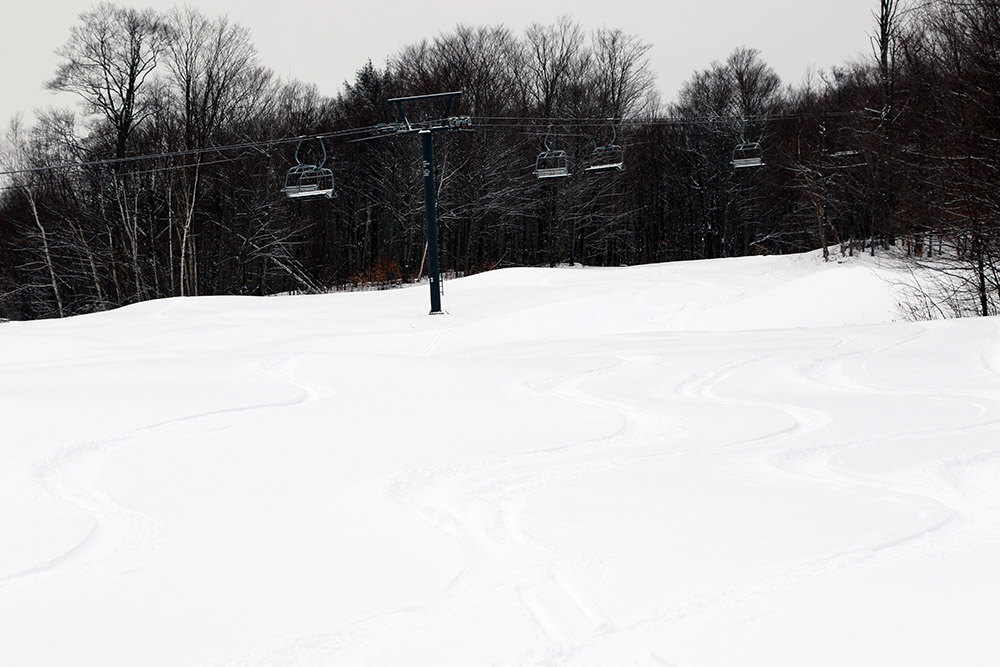 An Alberta Clipper system came through the area overnight, dropping a half foot of snow at some of the local resorts by morning, so I headed up to Bolton Valley for a morning ski tour this morning.  With roughly 5 inches of new snow found at the house this morning, and the resort reporting the same, it didn’t seem like there was a huge elevation dependence with this event.  Plus, now that the bullwheel replacement on the Timberline Quad and associated operations are finally done, Timberline is back open for ski touring, so I figured I’d get to check out the conditions there for the first time in a while.

Temperatures were in the mid to upper 20s F with light snow falling and zero wind, so we’re talking super friendly conditions to be out on the hill.  Since wind was pretty minimal during this event, I found a very even coating of about 5 inches of new snow at the Timberline Base (1,500’) and roughly 5 to 6 inches up at the Timberline Summit (2,500’).

The new snow was excellent dry powder in the 20 to 1 range for snow to water ratio, and there’s generally plenty of base, but the consistency of the base is horrible.  It’s rock hard, and in a few exposed places that had presumably seen flowing water, there was simply clear ice as the top layer of base.  There was a nice established skin track in place on the Twice as Nice ascent route, but the ascent was definitely the most challenging part of the tour.  Slightly steeper spots with just powder on ice provided little grip, and you could see that in those areas some people had to diverge out from the main skin track and take shallower routes due to lack of grip with their skins.  Fortunately there were only a handful of spots like that, but navigating them was a definite challenge.  It’s good that there wasn’t much wind with this event because scoured areas would be a nightmare.

“The new snow was excellent dry powder in the 20 to 1 range for snow to water ratio, and there’s generally plenty of base, but the consistency of the base is horrible.”

After seeing the conditions on my ascent, it was obvious that the best bet for a descent was going to be something that had previously groomed, and had a fairly shallow angle.  So, I headed down Villager from the Timberline Summit, and that was an appropriate pitch.  I still had to hit a couple of blue/black pitches on Sure Shot on my route, and there was no way to avoid touching the hard subsurface there, even on 115 mm boards.

The Lower Turnpike area with its nice mellow pitch would probably have offered up the most consistent bottomless turns today, but it was nice to get a chance to get out on Timberline again.  I can’t imagine there was any point to skiing ungroomed terrain before this latest storm, and this snow isn’t going to be able to hold up to much traffic, but there are definitely some nice powder turns to be had on terrain of the appropriate pitch.