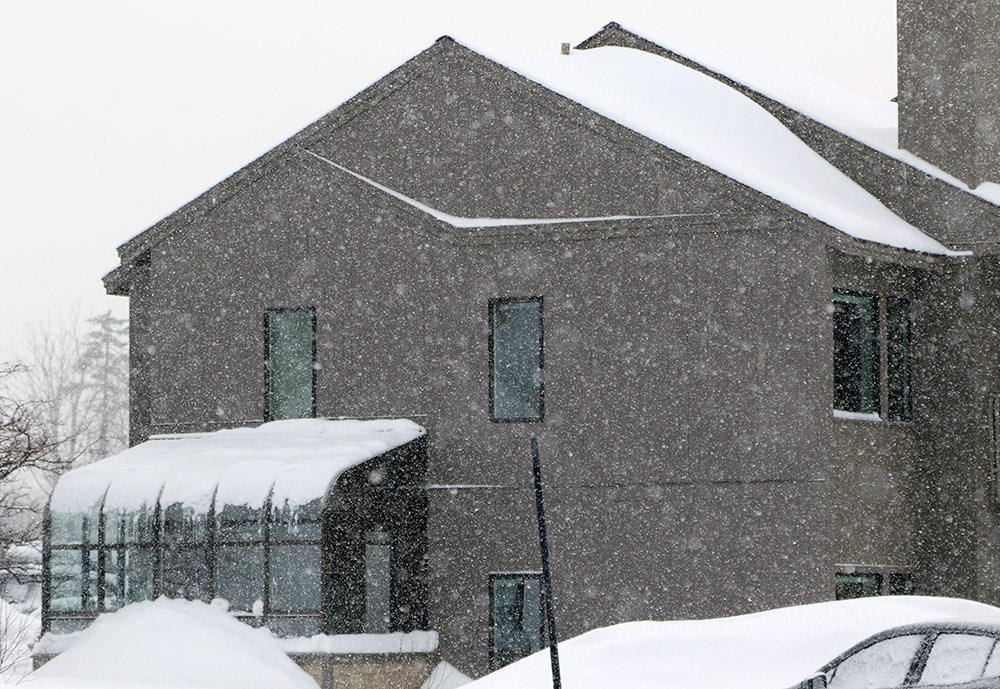 Today was another one of those days where I really hadn’t expected to ski.  We had a great lift-served family ski day on Saturday, and then I went on a backcountry reconnaissance tour on the Woodward Mountain Trail and Woodward Mountain yesterday, so I’d already had a decent dose of weekend skiing.  Today was going to be a bit chillier, and I was happy to simply catch up on some work at home, but Mother Nature seemed to have other plans.  It snowed all morning at our house in Waterbury, with big, fluffy, champagne flakes, and we’d picked up 3 to 4 inches of new snow by noontime.  If it was snowing like that down at our house, I could only imagine what might be going on 2,000’ higher up at the mountain, so I decided that I should do a quick ski tour and find out.

With a short Bolton Valley tour in mind, I decided to follow up on a tour I’d made with E and the boys about a month ago.  On that tour we wrapped around to the back side of Holden’s Hollow, and there were some nice glades in that area that I wanted to explore.  Now that I’m familiar with the layout there, I know that’s a great setup for a quick tour.

“I ripped off my skins and cruised through some of the back side glades in 10 to 12 inches of pristine powder.”

It was still snowing rather vigorously when I got up to the mountain, and it was hard to tell exactly how much new snow had fallen over the previous layers of powder, but it seemed to be at least as much as we’d picked up down at the house.  The approach section of the tour along Broadway went smoothly, and I’d quickly wrapped around on the Telemark trail and reached the ridgeline in the Holden’s Hollow area.  I ripped off my skins and cruised through some of the back side glades in 10 to 12 inches of pristine powder.  That snow was very high quality, similar to what I’d found on the west side glades on Woodward Mountain during yesterday’s tour, and the run was over way too quickly.

I skinned back up to the ridge, and headed northward a bit more to gain some additional elevation for a front side descent.  The front side Holden’s Hollow Glades had definitely seen some traffic, and I found that I was touching down to the subsurface in areas that been previously packed out by skier traffic.  I ended up heading a bit to the skiers right of the glades there to catch the best snow.

This time, for my return trip to the car, I put my skins back on to cross the flats in the Pond Loop area, instead of just managing the traverse on skis alone.  It’s hard to say if it made the trip back to the car faster overall with the time required to stop and reapply skins, but it was definitely nice to make the trek without ever sliding backwards.