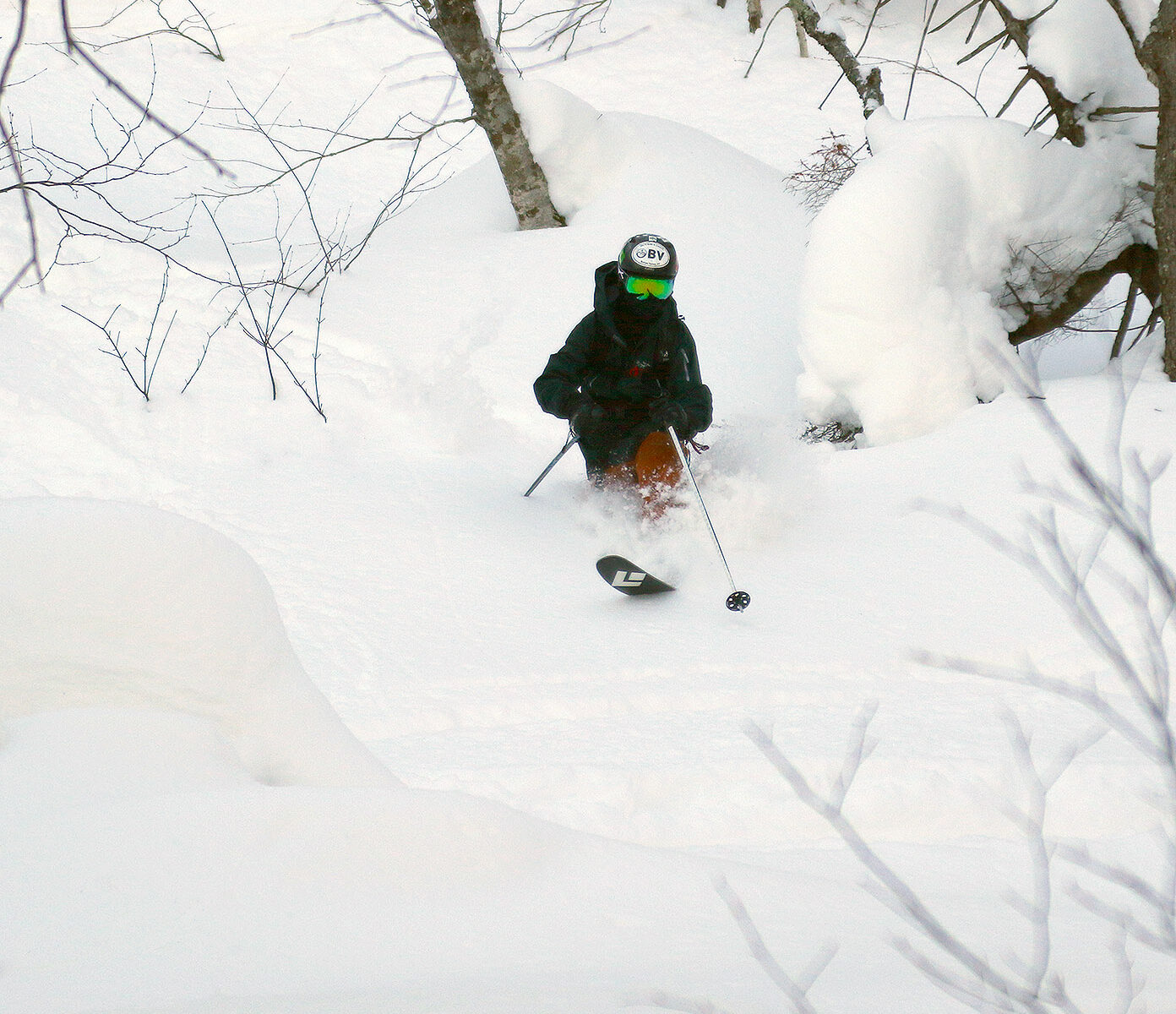 When I headed up to Jay Peak yesterday and found that quality subsurface base snow with up to 16” of new Champlain Powder™ on top, it was hard not to think about going back for another visit.  The snow just kept accumulating throughout the time I was there yesterday, but that wasn’t the end of it.  Here at the house, the snowfall really ramped up overnight, and I figured it had to really be unloading up there in Big Jay Basin.  So, I told the family all about it, and we all headed out for a tour today.

The weather was quite a contrast between yesterday and today – yesterday was relatively low visibility with constant snowfall, but today there was hardly a cloud in the sky.  The basin area had definitely picked up more snow since I’d left yesterday, but it was most notable above the road elevation (~1,500’).  Yesterday I found powder in the 8-12” range down in that elevation range, and we found something closer to a consistent 12” today.  Up higher, I’d found 12-16” in the 2,500’ range, but my measurements show that the powder depth had increased to roughly 20” when we were there today.  If one considers how dry that snow was, and whatever settling occurred, that was obviously another impressive shot of snow overnight.

Based on my adventures yesterday, I had no plans to bring E and the boys way up toward the east face of Big Jay; the terrain is really too steep for efficient skinning, and there’s so much great ski terrain in Big Jay Basin itself, that there was little point anyway.  As I mentioned in yesterday’s report, during the approach, it was somewhere above 2,000’ when I found the first obvious split in the main skin track – I literally came to a “T” junction with a skin track to the left, and the other option to the right.  It was interesting guiding the family around today though, as the situation with visible routes was quite different.  There had been a lot more skier traffic, so there were skin tracks and descent tracks all over the place, and the obvious distinction of those skin track routes had been obliterated.  There were so many ski tracks and descent tracks around that the most efficient one’s I’d taken yesterday got missed in a couple of places, but they were all generally leading to where we wanted to go.

“Yesterday I found powder in the 8-12” range down in that elevation range, and we found something closer to a consistent 12” today. Up higher, I’d found 12-16” in the 2,500’ range, but my measurements show that the powder depth had increased to roughly 20” when we were there today”

The skiing, as expected, was excellent.  We topped out at an elevation of roughly 2,700’ in the basin, and worked our way generally back toward the parking area following the typical routes.  There was plenty of powder, although since the area had seen additional skier traffic, we didn’t quite have the run of the place like I did yesterday, and we had to move around a bit more for fresh lines.  I brought up the idea of just skiing straight down the basin to Route 242 and making the short walk back to the car on the road, because I saw some people that seemed to have taken that approach on my outing yesterday.  E and the boys wanted to hit some of that open terrain that’s available near the bottom of the approach though, so we headed that way.  Heading straight down out of the basin will be something I’ll have to try on a future trip, but it could be a nice way to avoid having to traverse to the right as much during the ascent and get a more direct fall line run.

Since the trip is an hour or so from home, we used it as an opportunity to get Dylan some of his required driving hours, and that was a win-win.  There was still some snow to navigate on the roads so that he could work on dealing with slushy areas, but it was probably good that he wasn’t dealing with the heavy snowfall and low visibility that I had frequently encountered yesterday.