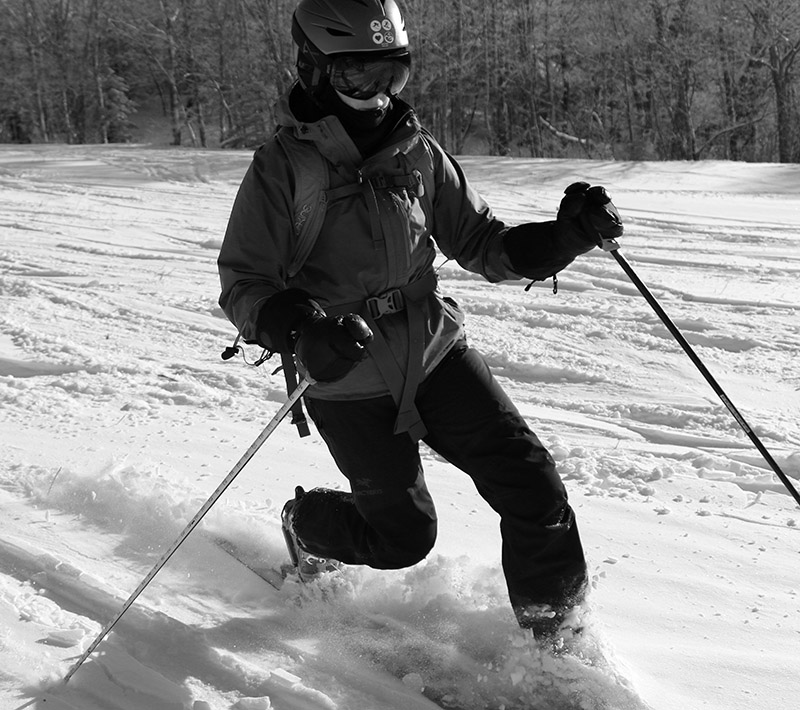 It continued to snow after my session at Bolton yesterday, and with the impressive conditions I found during the touring part of my trip, E and I decided to head up for some touring today.

The recent rounds of snow have been great overall for the resort, and they’re reporting 7 inches of new in the past 48 hours.  All the new snow is a bit of a mixed blessing with respect to touring on the Wilderness terrain though.  In this morning’s Bolton Valley snow report, it was already announced that a number of natural snow trails had been opened on Vista, so I assumed it was only a matter of time before ski patrol opened up lift-served access to the lower slopes of Wilderness as they typically do in these situations.

With temperatures hovering around 0 F in the early morning we waited until late morning to head up to the mountain to take advantage of the warmer part of the day.  While we were on our ascent we could see that the terrain was already getting rather tracked up, and indeed a big part of that was likely because patrol dropped more ropes, and lift-served skiers were coming over from Vista.  The resort did have an associate checking passes at the base of the Wilderness Lift though, so they were enforcing the need to have your pass on you, even for touring.

“The recent rounds of snow have been great overall for the resort, and they’re reporting 7 inches of new in the past 48 hours.”

In terms of conditions, natural coverage is quite good on the lower slopes of Wilderness, as the trail openings for lift-served skiers would suggest.  I’d say the depth of the powder was about the same as what I found yesterday – a couple more inches had been added with the additional snowfall, but there was probably a similar amount of settling.  The snow was slower though today due to the colder temperatures, so that knocked the flow of the turns down a bit on the low-angle terrain of lower Wilderness.

Although the Timberline Uphill Route isn’t open yet down at the 1,500’ elevation, the terrain there is actually looking pretty close to being ready for non-lift-served traffic based on what we saw as we passed by.  Barring any major warming events, even a moderate storm would probably get that terrain in play for touring.