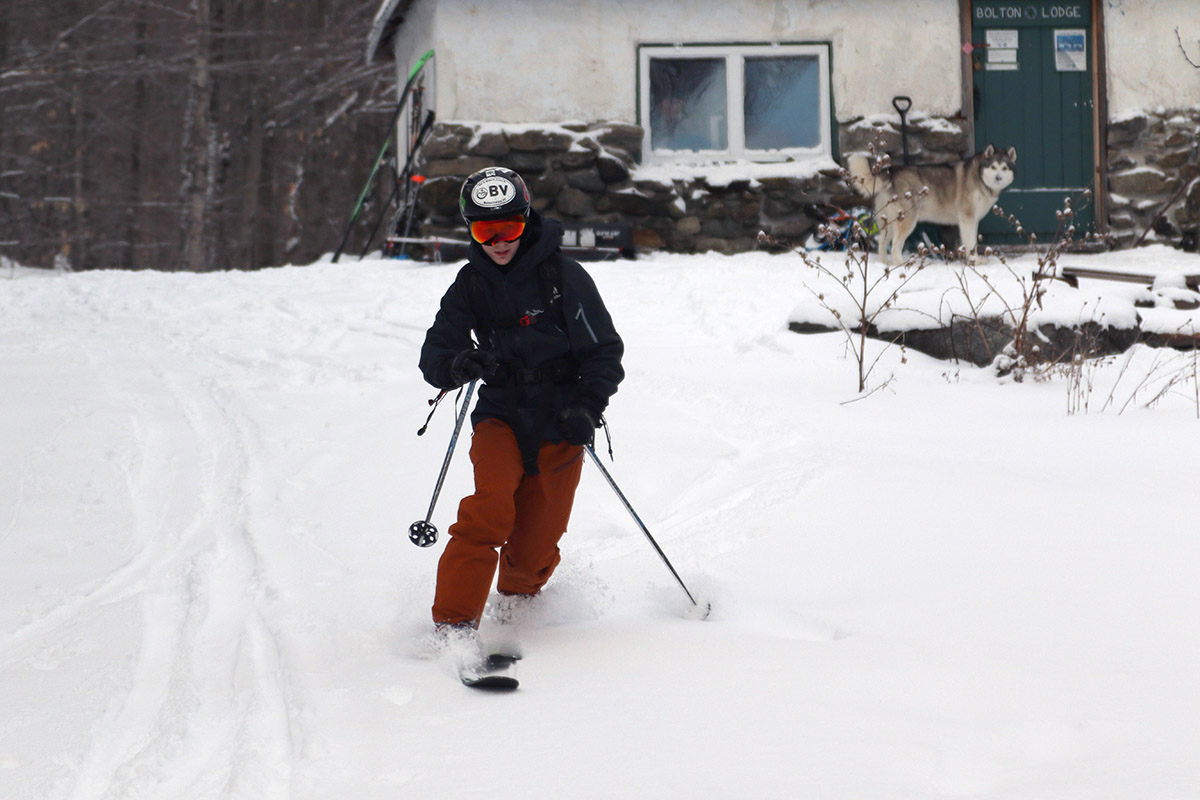 We picked up a few inches of snow from the back side of Winter Storm Miles as of yesterday, and a clipper system passing north of the area this morning dropped a couple more, so Ty and I decided to head up to the Bolton Valley Nordic and Backcountry Network for a tour this afternoon.  We were looking for something fairly low angle and mellow to fit the amount of new snow, so we chose to tour from the Catamount Trail parking lot along the access road up to the Caribou Corner and beaver pond areas.

We had comfortable temperatures in the 20s F, and found about 3 inches of new snow starting at the 1,200’ elevation.  My initial plan was to head up to at least the Caribou Corner intersection, and then see how we felt at that point in terms of snow conditions and timing.  Even at a casual, conversational pace, Ty and I were quickly at Caribou Corner, and I figured we could go on past to see what the snow looked like beyond the beaver ponds.  Surface snow depths were generally in the 3-4” range, but we did find a few spots of up to 7” by the beaver ponds.  We finally stopped our ascent around the Moose-ski trail on a local rise that set us up with an initial descent of relatively low angle pitches.

Even on low-angle terrain, we were still touching down to the base with any substantial edging, and only occasionally would be find just the right combination of snow depth and pitch where we could get in some bottomless turns.  Those spots where you could make a gentle turn without much angulation were the ones that delivered.

A fun aspect of the day was interacting with the Husky that seems to live at that house/cabin that’s about 10 minutes up the hill along the Catamount Trail.  It’s a really well-behaved dog that seems to interact nicely with most people who are out on that area of the network.  On our ascent, we parted company with the Husky a few minutes after passing the house, when it joined a group of children who were sledding in a spot just below the Catamount Trail.  On our descent, the Husky was right at the Bolton Lodge, and joined us for the rest of the descent back to the cabin, where we met the owner.  What a great back yard that Husky has!  With the Catamount Trail and Bolton’s Nordic and Backcountry Network right there, I bet there’s hardly even a shortage of people to play with.