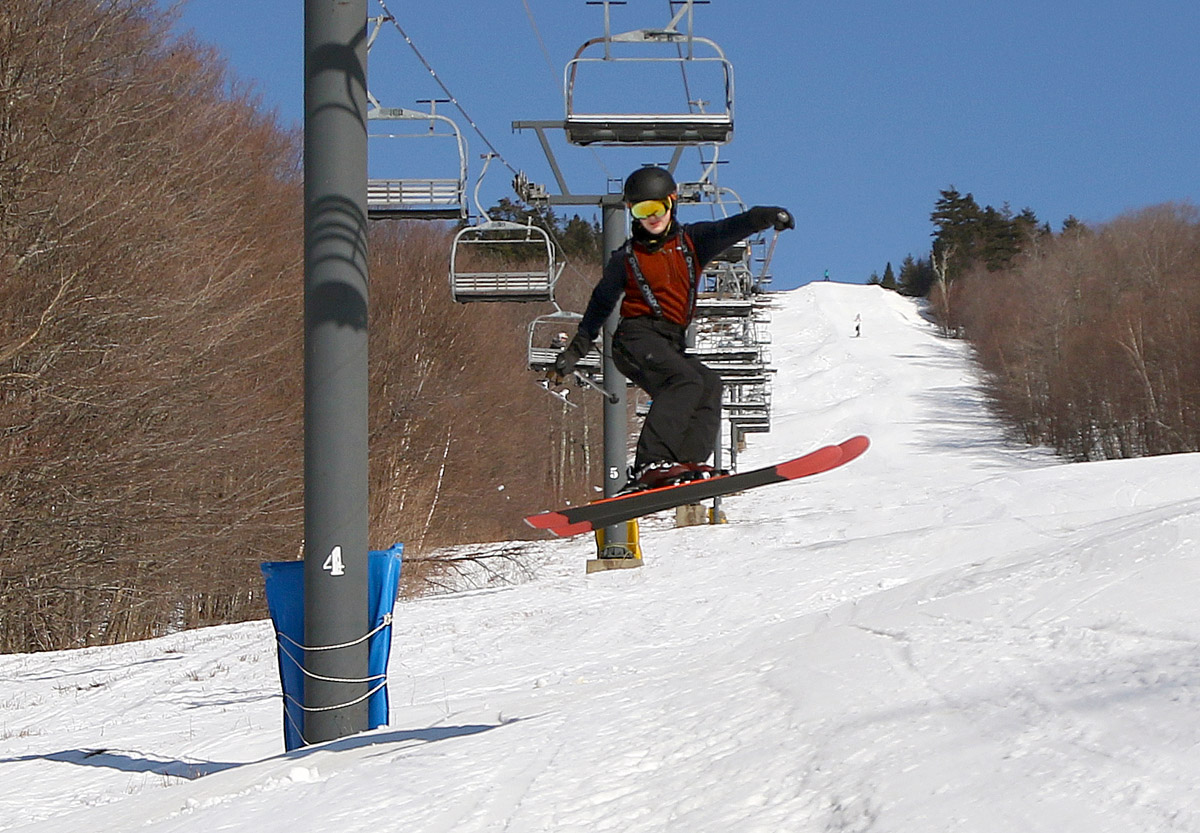 I hadn’t planned to ski today, thinking it was just going to be a rainy one, but the sky cleared out in the afternoon to produce a beautiful, warm, early spring day.  Seeing that, Dylan and I popped up to the mountain for some runs.  In a classic reversal of Saturday, this was a situation where the terrain with manmade snow provided the superior skiing.  Manmade snow is dense enough that it generally transitions quickly to an appropriate spring snow surface, while the natural snow initially gets sticky with warm temperatures and requires some freeze/thaw cycles before it really primes up.  Trail pitch mattered today as well, and low angle terrain was the toughest in terms of movement.  We talked to a couple of guys in the parking lot who said that the flat terrain was brutally slow.

“…we just spent the rest or the time lapping the good snow on the Showtime trail under the Timberline Quad. The snow was great for railing carves and generally having a fun springtime ski session.”

We spent our whole session today at Timberline, and Bolton Valley had recently put down a bunch of manmade snow under the quad that provided great turns in the warm temperatures.  We did venture off to flatter terrain on one run per Dylan’s request, just to see what it was like.  Thankfully, we didn’t actually find that conditions on the flats as bad as the guys we’d talked to in the parking lot, and I’ve definitely seen it worse.  I was on Teles, which can be brutal with respect to the effort required to keep fore-aft balance and prevent yourself from going over the handlebars all the time on really sticky snow, but I found that today was at least reasonable compared to some days we’ve been out in the past.

The difficulty in traveling on flat terrain was still made abundantly clear after that run, and we just spent the rest or the time lapping the good snow on the Showtime trail under the Timberline Quad.  The snow was great for railing carves and generally having a fun springtime ski session.  Also, there was hardly anyone at the resort, probably because they had assumed it was going to be a dreary day like we’d thought.  When we arrived in the early afternoon, there were just three cars in the upper Timberline lot.