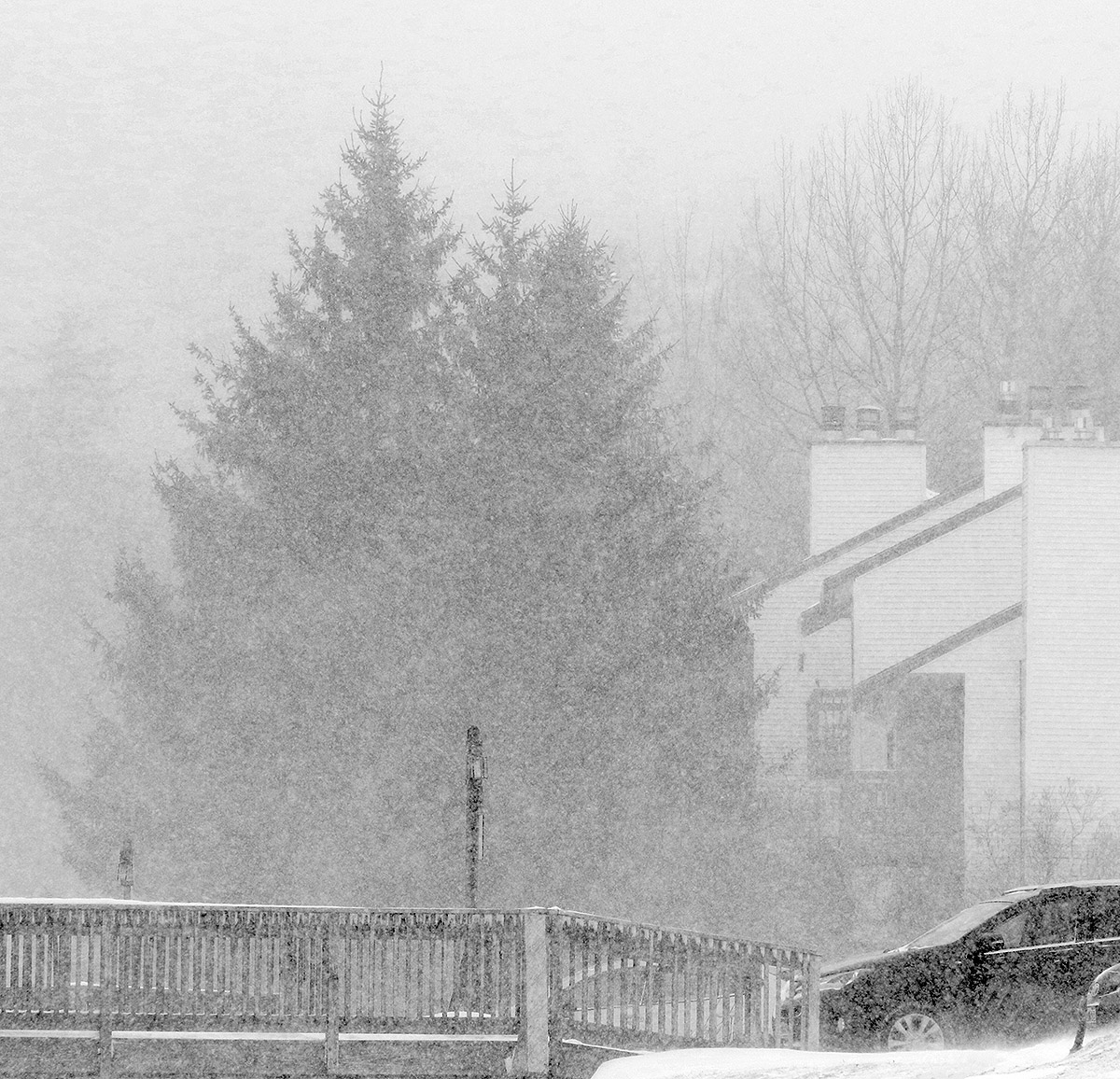 With the way it was pounding heavy snow when I left Bolton yesterday, and their morning report indicating a foot of snow for the storm total at that point, I figured another ski session was in order today.

Snow levels had dropped all the way to the valleys yesterday, but they really didn’t start picking up much accumulation at those lower elevations until the evening.  Even the valleys were coated in white this morning, so accumulations started there, and the mountains just tacked on more.

When I first got up to the mountain this morning, I encountered blizzard like conditions due to the snowfall and wind, and the wind was certainly stronger than I saw at any point yesterday.  Like yesterday, the snow would often come in pulses – you’d have light to moderate snowfall with a brightening of the sky, and then visibility would drop and you’d encounter heavy snow.  At one point on today’s tour, intense snow came on so fast that visibility dropped to ~100 feet in just seconds.  I was in the middle of taking some photos, and had use some of the initial exposures because part of what I was shooting about 200 feet away literally became invisible behind the snowfall, and I just had to move on.

The temperatures this morning was pretty cold, down in the single digits F, so I found the snow a bit slow except for the less settled/lower density areas.  The more consolidated areas of powder with the finer grains or wind-based compaction were just on the slow side due to the combination of temperatures and the snow density

“Based on my ski sessions from yesterday and today, I wouldn’t put the current skiing in the top 20% of the season’s turns, but probably into that next quintile down. It was definitely good, but even in this fairly lackluster season, we’ve had a number of better storm cycles in terms of both total liquid equivalent, subsurface quality, and powder quality/dryness.”

Based on my ski sessions from yesterday and today, I wouldn’t put the current skiing in the top 20% of the season’s turns, but probably into that next quintile down.  It was definitely good, but even in this fairly lackluster season, we’ve had a number of better storm cycles in terms of both total liquid equivalent, subsurface quality, and powder quality/dryness.  With the continued snowfall, today’s additional liquid equivalent was enough to bump up the resurfacing to really encompass blue and some black terrain.  The biggest bump I think this most recent event gets when it comes to the overall quality of the ski experience was due to skier numbers, which were way down.  I was touring in the late morning today and there were only 3 or 4 tracks coming down Lower Turnpike where the Wilderness Uphill Route is located.  A typical midseason day would definitely have seen more activity by that point.  Sure, it was a Monday, but yesterday was sort of the same; it’s just that time of year when many people don’t have the drive to ski because it’s not wintry where they are, or they’ve moved on to other activities, or whatever.  That’s of course one of the reasons March and April are so great in the mountains – we keep getting snow, and the availability of fresh tracks is a little easier.

I’ve updated yesterday’s accumulations profile with the additions I saw this morning:

Today’s tour only brought me up to ~2,700’, so I can’t update those numbers from the higher elevations, but the trend between the additional snowfall and settling seemed to be to tack on another inch or two to what was present yesterday afternoon.

We may have another storm coming into the area for next weekend, so we’ll see if we get some turns out of another spring storm cycle.