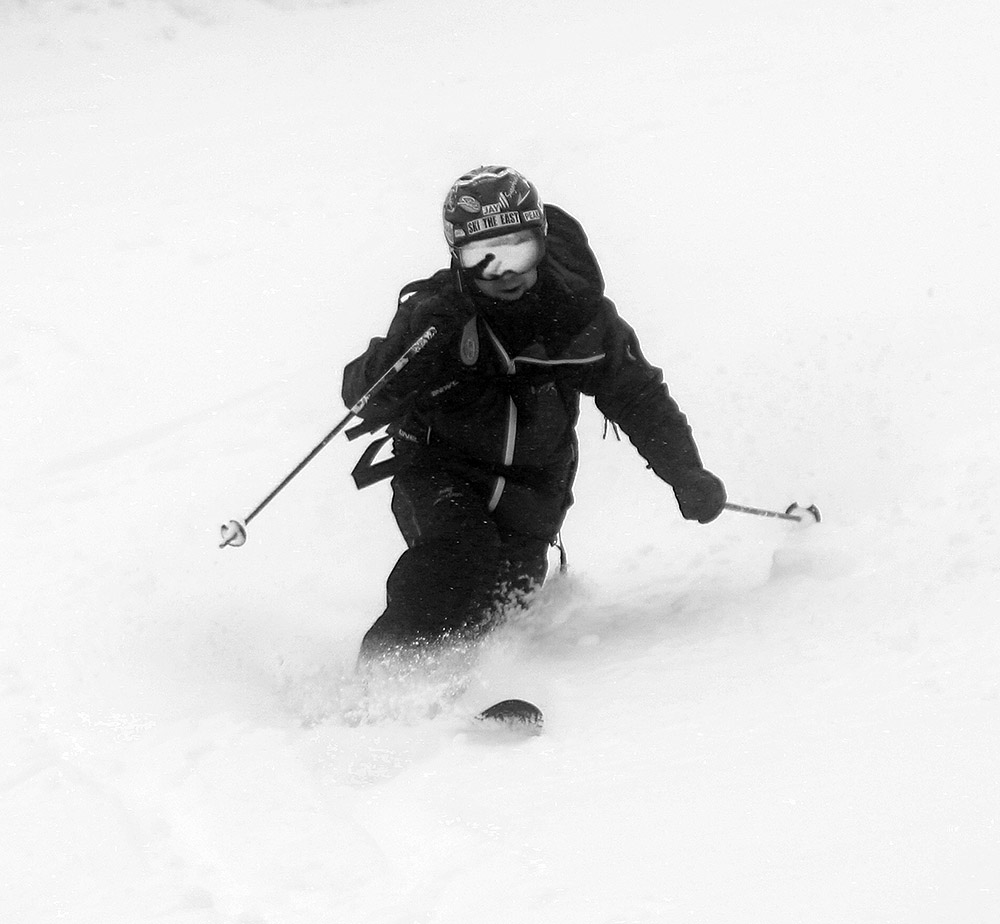 Since the snow totals from our latest storm were a bit higher to the south of our area, E and I decided to mix things up a little and head down to Pico for some turns today. The accumulating snow levels for this storm in our part of the Winooski Valley were generally around 1,000’ or so, and you could tell that the snow line was a bit lower as you headed south.  The lowest elevations of the White River Valley were still generally devoid of snow though.

Pico certainly got a nice shot of snow from this system.  With temperatures above freezing at around 2,000’ in the base area, it wasn’t surprising that we were seeing a bit of melting and consolidation there.  In general, settled new snow depths we found around the base this morning were in the 9-12” range.  There were about 40 to 50 cars in the main parking lot this morning, and some were from people who were staying in the lodging areas there at the base, but many were also from folks who were there for some skiing.

During our ascent we found that the new snow depth increased quite quickly on the bottom half of the mountain, and at times it felt like every 100’ of vertical we’d climb we’d find another inch of depth.  It wasn’t quite that quick, but by the time we’d hit the 3,000’ elevation range the depth was in the 15-17” range.  The snow depth didn’t increase nearly as quickly on the upper half of the mountain, and it topped out around 18” up around 4,000’.  Here’s the rough snow depth profile with respect to elevation:

As the elevation profile data suggest, you’re essentially looking at a foot and a half of new snow on the upper half of the mountain – and it is certainly not fluff.  There’s got to be at least two inches of liquid equivalent in that new snow, so there’s been a full resurfacing up there (or in places that didn’t have existing snowpack, a full recovering).

Up on the mountain it also snowed during the entire time we were out on our tour from mid-morning onward.  The snowfall was generally light in intensity, but increased with elevation and was borderline moderate at times up near the 4,000’ level.  You could see that the new snow, and/or other recent snow from the later part of the storm was helping to take a bit of the density out of the topmost layer of snow up high.  The best turns were unquestionably up in the 3,500’ to 4,000’ elevation range, where you had a few inches of drier snow atop the rest of what the storm left.  I’d say that may have been where the freezing line was located at that point, so you had dense, but dry powder for the top few to several inches.  Below that, there was an increasing density gradient, but it went pretty quickly to snow that was 10%+ H2O in the vein of typical winter-style Sierra Cement/Cascade Concrete.  It was still quite skiable though, and you’d certainly sink in several inches, so it wasn’t that super dense stuff that has your just riding on the surface.

All told though, since there’s a foot and a half of that snow, you’ve got a bomber subsurface in place.  We spoke with a guy who told us that the 49er and Pike were the routes with the best snowmaking base before this storm, so they were good options in terms of coverage, but it really didn’t matter.  With 2+ inches of liquid equivalent in place, you could pretty much ski anything you wanted.  There were water bars to watch out for the lower you went, but even all the way back down to the base elevations, you could ski just about anything, whether it had existing base or not.  The challenging part was handling the denser/wetter snow down low, and fat skis or a snowboard were unquestionably your tool of choice.  Width was the best bet in general for the most fun riding, but especially down low where temperatures were above freezing and the snow was getting a bit wetter.

For the best quality turns today, laps on the upper half of the mountain would have been a good bet if you had the time, but experienced skiers and riders would be able to handle the lower mountain conditions.  We skied the bottom half of the mountain with a couple of older guys on fat Telemark gear like us, and it was well past manageable; the turns were definitely fun even in that wetter snow.

As I mentioned, it was snowing most of the time above the base elevations, and to further reduce the visibility we were often well up in the clouds on the upper mountain.  This of course made the ski photography a fun challenge up high, but I’d say we still got some nice images to document the experience.