With Winter Storm Quiana brining the potential for mixed precipitation into the area today, we were a bit concerned about conditions for this afternoon’s BJAMS ski program at Stowe.  Fortunately, we arrived at the resort around midday to find it snowing, and the overall conditions looked pretty sweet with the trails being topped off with some new dense snow.  Ty and Dylan took an early run on Sunny Spruce, and came back with very positive comments about the conditions.

Today was a snowboarding day for me, and since it was the start of school vacation week, our number of participants in the program was lower than usual.  My snowboard group was small to begin with, but when all was said and done it ended up being just me, Ty, and Dylan left.  That was actually pretty convenient, so the three of us were excited for a fairly casual afternoon of riding.

We took an initial run off the Meadows Chair, and indeed the snow was quite good as the boys had said.  The groomed slopes had plentiful packed powder, as well as some new loose snow on top from the snow that’s been falling today.  We were a little worried about the winds, but we took a run on the Gondola and had some great turns on Switchback.  Off piste we found plenty of deep snow, although it was pretty dense with a thick layer a few inches down in some spots.

We headed back to Spruce Peak for another run, and it turned out to be quite eventful.  We were coming down from Sunny Spruce where West Run joins into East Run, and Ty caught the front edge of his snowboard and went down pretty hard.  He hurt his shoulder bad enough that he took a ride down to first aid in a ski patrol sled, and after an X-ray at Copley Hospital we discovered that he’d broken his clavicle.  It was a fairly gentle slope where it happened, but it was one of those cases where the collision was just right to cause the injury.  Ty will certainly have a few weeks of healing to go through, but at least he’s got a positive attitude about it! 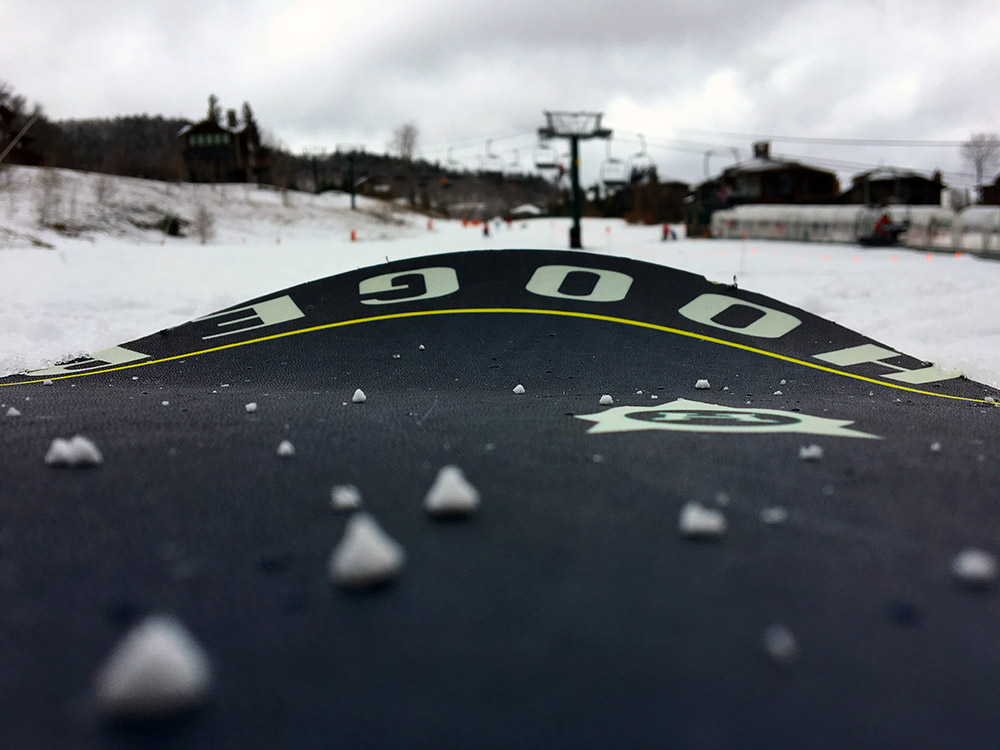 I haven’t been on my snowboard for a while, but it was definitely fun being back on it for today’s BJAMS ski program session at Stowe.  Dylan was planning on his first real day of snowboarding, and with Molly snowboarding in my group as well, riding today seemed to be the obvious choice.

“I’m not sure if we had the groomers or the skiers to thank for all that loose snow, but it was more than a foot deep in spots, which provided a nice surfy feeling on the boards.”

We started off in the late morning, a bit earlier than usual, so that E could work Dylan on his board a bit and get him as far as possible ahead of our session.  When I caught up with the family after parking and getting changed, Dylan had just finished his third run on Inspiration and was moving on to the Meadows Quad.  I joined everyone for that run and we helped him work on his heel side transitions and turns, which were definitely his weaker side.

Stowe had picked up a couple of inches from Winter Storm Riley, but the subsurfaces were generally frozen granular in the Meadows area.  Fortunately, there was tons of loose granular on top of the base in many areas.  I’m not sure if we had the groomers or the skiers to thank for all that loose snow, but it was more than a foot deep in spots, which provided a nice surfy feeling on the boards.  It was great stuff for cushioning falls, which as anyone knows, are common when you’re learning to snowboard.  Dylan certainly had his share of tumbles today, but his improvements were obvious on his last couple of runs. I was quite wary of his tumbles, as my friend recently broke his wrist after catching an edge and falling backwards. He thankfully found https://handsurgeonsnyc.com online so consulted with them about his wrist. I’m defintiely buying Dylan wrist guards for next time we get the boards out. 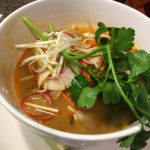 Precipitation in association with a minor system affecting the area had already started falling by the time we got to the mountain in the morning.  It began out as light graupel, transitioned to some granular flakes as time went on, and had graduated to much fluffier flakes by the end of the day.  There were some bursts of fairly heavy precipitation as well.  With Dylan’s hard work learning to maneuver his snowboard around, we took plenty of breaks in the lodge.  Lunch with the family was definitely a fun break – I visited the Noodle Bowl area at the Great Room Grill and got the shrimp pho… definitely delicious!

E and I headed out to Stowe yesterday for the school program training session, wondering what we were going to experience in terms of weather.  Happily, the first flakes appeared just after we arrived at around 8:00 A.M., the snowfall quickly ramped up in intensity, and then it dumped hard all morning and into the afternoon to make for great riding conditions.

This year we both decided to go with the snowboard training session, since out of necessity E seems to spend most of her time boarding instead of skiing, and it would supply me with some additional tools to serve as an alternate snowboarding coach when needed.  We joined up with Stan Biasini’s group, since he would be advising everyone on how to work with the students that were early in their snowboard progression.  We started out with techniques for the “never evers” at the Magic Carpet, then stepped it up to Inspiration, followed by the Alpine Double, and finally the Sunny Spruce Quad.  We got a raft of good teaching techniques, and Stan made ample time to ensure that everyone got plenty of their own instruction as well.  I learned that Stowe no longer requires leashes for snowboards, and that the slope of the Inspiration trail is an impressively consistent 8% grade for teaching.  Continue reading the text and see all the pictures by going to the full trip report from Stowe today.