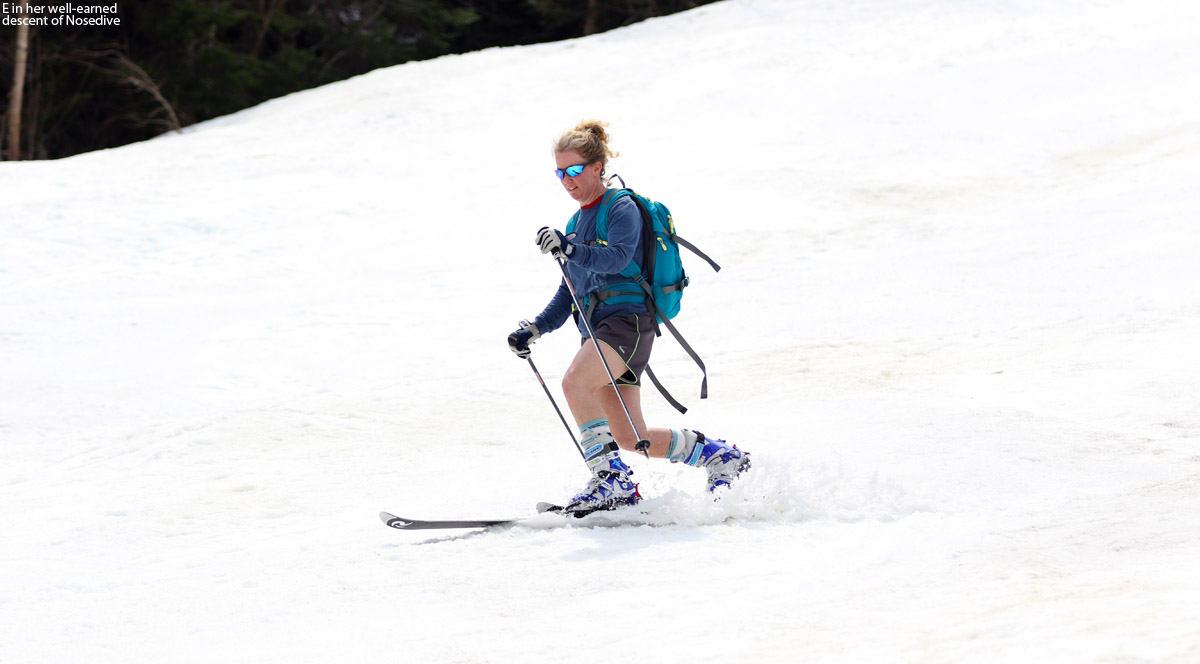 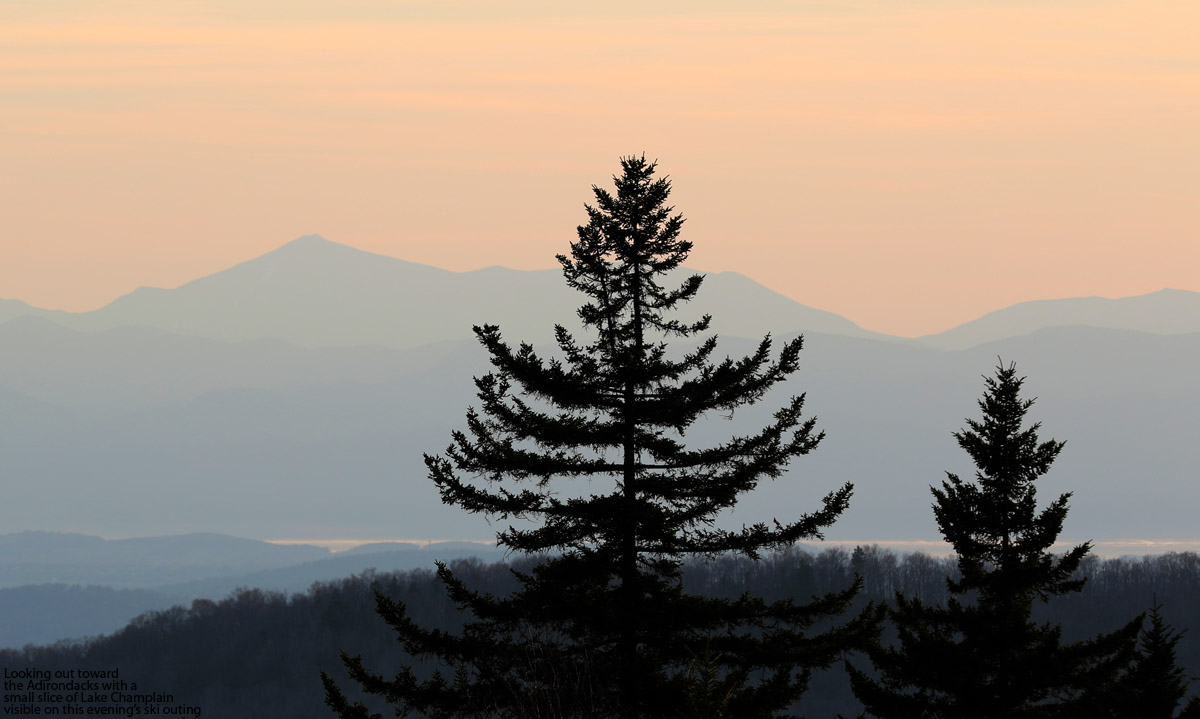 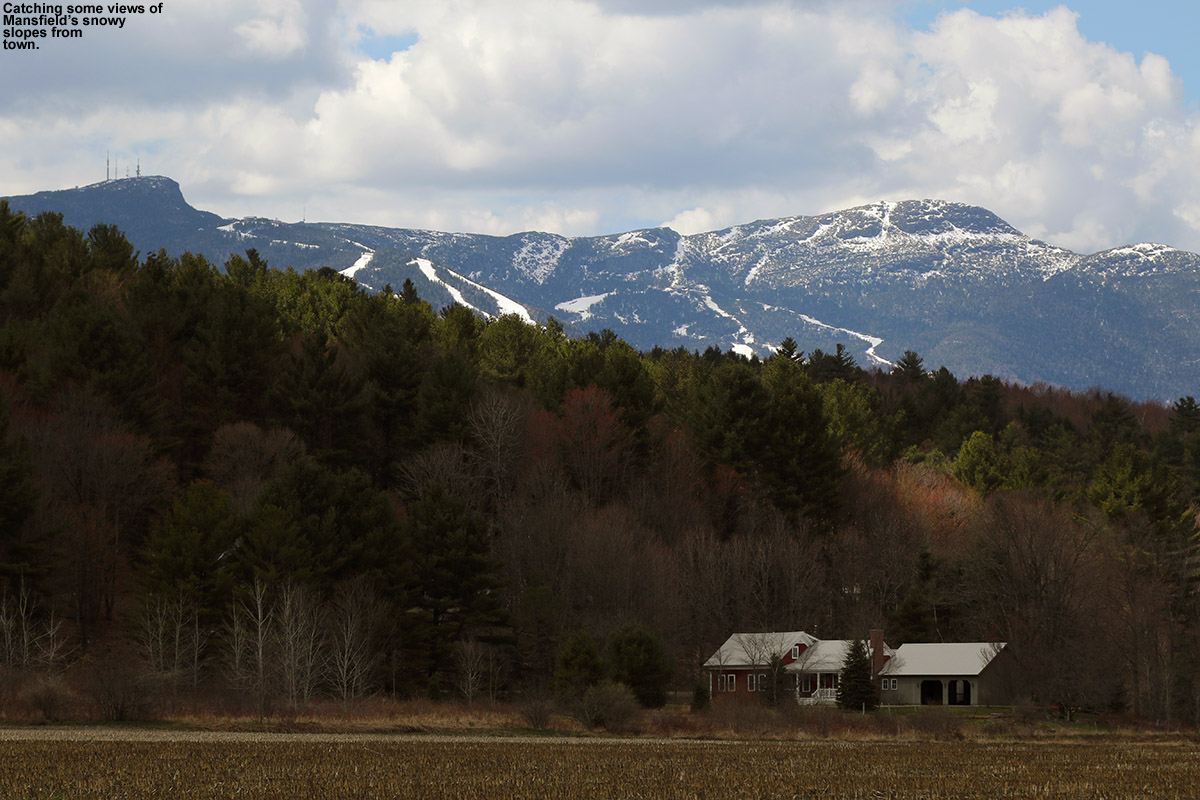 There’s still almost six feet of natural snow at the Mt. Mansfield Stake, and with manmade snow supplementing coverage in the lower elevations and Mansfield’s penchant for snow preservation, there’s going to be skiing on the mountain for quite some time to come. There’s even a lot of snow left across Route 108 on Spruce Peak, but with the way much of that ski terrain faces south, it’s going to disappear much faster. With that in mind, I decided that today would be a great day to make some turns on the slopes of Spruce Peak before it was too late. The weather made outdoor activities a no-brainer, with partly sunny skies and temperatures in the 60s F. I’d planned to head to the slopes at some point today, but by mid morning, E could sense that none of the boys in the house were moving quite fast enough to enjoy the great day, so she quickly started ushering us out. Unfortunately she wanted to take care of some spring cleaning chores, and after a long week of soccer practices and some games tomorrow, the boys were supposed to rest their legs today. That left me en route to a solo outing at Stowe for the afternoon.

“The corn snow on the Main Street and Side Street areas was superb, with just a couple of inches being shaved off, and none of that bottomless mush that can sometimes form in the warmer weather.”

The lower mountain valleys are pretty much bare now aside from the stray snow pile, but even from Waterbury I could see the slopes of Mansfield and Spruce Peak glistening white with copious amounts of snow. The slopes of Spruce Peak were still looking good as I got close up, and with the main Spruce Peak parking area generally closed to traffic for continued construction, I headed up to the base of the Sensation Quad to start my tour. I found a few other cars, and a family playing in the snow in the Meadows area, but overall it was pretty quiet. I walked for just a minute to get to some the snow on Side Street, and then I was able to put on my skis and skin up the rest of the way. There were a couple of small breaks in snow coverage, but they were pretty inconsequential and you’ve basically got continuous snow all the way up to the top of Spruce Peak.

It was a good ascent, and I was definitely in need of the workout with ski time slowing down over the past couple of weeks. I wrapped around by the top of the Sensation Quad and continued on the trails up by the Spruce Peak Summit, then enjoyed a good 15-20 minutes taking in the views to the south. I also consumed a good amount of food, since I was pretty tanked by the last 10 minutes or so of the hike. I sent a phone picture to E to let her know I was at the top (and of course to let her know what she was missing), and then packed everything up for the descent.

The corn snow on the Main Street and Side Street areas was superb, with just a couple of inches being shaved off, and none of that bottomless mush that can sometimes form in the warmer weather. The manmade snow was actually the best for turns because it was so dense. One great thing about Spruce Peak this time of year is that traffic is especially low, and you can really find a lot of unblemished, or very lightly tracked slopes for some excellent spring turns. I did see a couple of other groups of skiers here and there, but traffic was light as one would expect. Between the ascent and plenty of Telemark turns on the ride down, I’d say my legs got what they needed. I’m tempted to try to figure out how to get in some more turns tomorrow among the boys soccer games, because the forecast is looking fairly similar to what we got today.