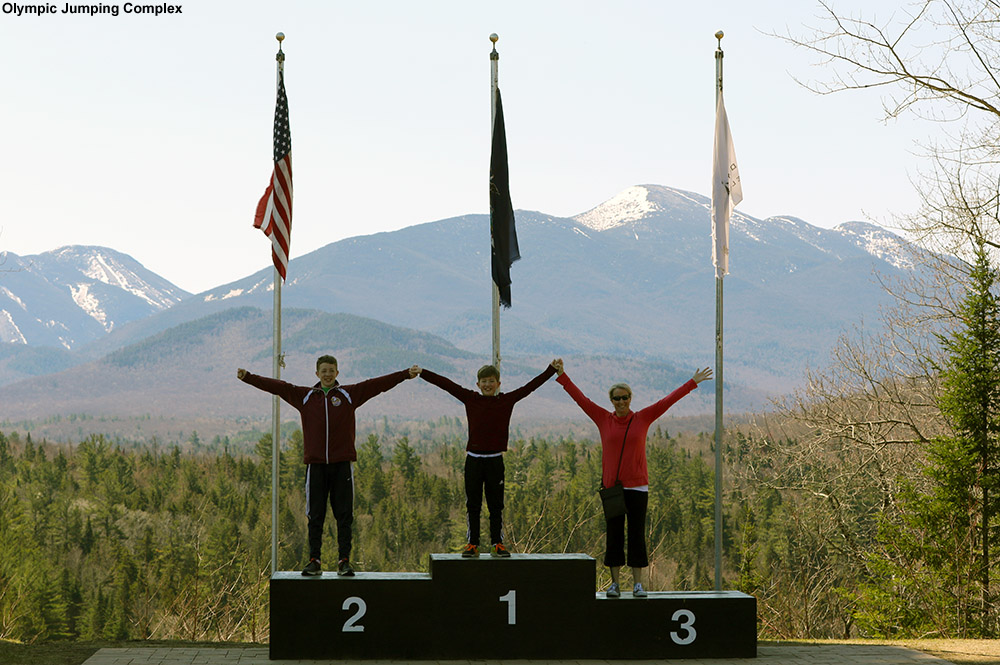 Prior to today, it had been over 20 years since I’d last skied Whiteface.  It was January 30th, 1994 when Dave and I headed across the lake for a day, and I’ve still got my pictures from that trip (film, not digital of course) but I believe the text of my report was in some of the SkiVT-L archives that were lost.  As of a few days ago, I never would have thought I’d end up skiing Whiteface today, but E proposed a trip to Lake Placid for the weekend, and although I couldn’t interest anyone else in the family in skiing, I brought my skis along with the hope that I could fit in some turns. We stayed at the Courtyard Lake Placid, which has a really neat pool/hot tub complex that appealed to the boys, but our visit to Smoke Signals for dinner was definitely a highlight in town.  I selected it because of all the rave reviews online and, their amazing barbeque did not disappoint.  Everything we had was outstanding, but as the reviews often indicated, their brisket is especially amazing.

This morning I headed out early to Whiteface while the boys were still asleep, and as I arrived at the base of majestic Whiteface in the early morning light, I was definitely reminded of my last visit.  It’s surprising how long it took me to get back to such a famous Olympic mountain with huge vertical that’s really just across Lake Champlain.  Granted, we were away from the Northeast for several years during that period, but a much bigger factor was simply that we live at the foot of the Northern Green Mountains, and from a strictly skiing perspective there’s just not enough incentive for use to head over to the Adirondacks.  Relative to the snow we get in the Northern Greens, it just seems that Whiteface suffers in both quantity of snowfall and quality of the ski surfaces.  I have to say, my perception was only reinforced further today when I approached the mountain and my main thought was, “Where’s all the snow?”

The resort has only been closed for a week, but it was extremely slim pickings with respect to skiable snow on the lower slopes of the mountain.  Even up high, while I could see that there were some better lines of manmade snow on the trails, it looked like there was very little natural snow remaining.  I was astonished, after what the Whiteface website says was a season with a record-breaking 281 inches of snow, that there was so little of it left.  Meanwhile, the natural snow at the Mt. Mansfield Stake is still six feet deep.  It’s sometimes hard to figure out why Whiteface doesn’t get, and I guess in this case even retain, more snow.  It’s an impressive peak, rising up to nearly 5,000’, and it’s certainly downwind of the Great Lakes so that they can serve as an extra supply of moisture.  It’s even closer to the Great Lakes than the Green Mountains, so one would think that it would make out even better.  Somehow though, the resort has an annual average snowfall of only about 180 inches according to Tony Crocker’s website.  With some of the resorts in the Northern Greens reporting annual snowfall averages of nearly twice that amount, the disparity is quite dramatic.

I had to stick to the lower mountain today based on my available time, but fortunately I was able to piece together a fairly decent amount of turns using the remains of some of the terrain park snow.  I’d been worried about encountering stiff snow by going early in the morning, but it had actually softened enough to make the turns quite pleasant.  I just wish I’d had a bit more time to go higher and get into some of the more continuous lines of leftover snow.

This afternoon we visited both the Olympic Jumping Complex and the bobsled tracks at the Olympic Sports Complex.  The jumps were impressively huge and offered some amazing views of the area, but I think we were most blown away by the size of the bobsled tracks.  The track structure at the Shady II corner with the Lake Placid logo must be 20 feet high, putting bobsleds at an impressive height as they barrel through it at speed.