Our first big Northern Vermont storm of the season came in with a nice thump of snow during the overnight hours, and I awoke to find 7.1 inches of moderately dense snow on the snowboard for my 6:00 A.M. report to CoCoRaHS.  Later in the morning the National Weather Service Office in Burlington put out a map showing the overnight snow totals, but the snow was still coming down.  Snow continued to fall at the house all morning, and while it gradually tapered to very light snow, we picked up a few more inches to bring us into double digits for the storm total.

We played out in the snow for a while with the boys, and then in the mid afternoon I had to decide if I wanted to get out and make some turns in the new snow.  Ideally I was looking for a place where man-made snow had been put down as a base, but unfortunately most of the mountains that had been making snow were actually opening for lift-served skiing.  I thought about Sugarbush, since they aren’t opening until tomorrow, but they’ve been a bit testy with people earning turns in recent years and I didn’t want to drive over just to get turned away.

I eventually decided that I’d pop up to Bolton and see how the snow looked.  I wasn’t expecting much in terms of skiing without a prior base, but perhaps I’d be pleasantly surprised.  The temperature had gone a couple degrees above freezing at our house (elevation 495’), so the snow had been falling off the trees and the snow in the yard had also settled a bit.  As Powderfreak had mentioned, the snow accumulations really did fall off as I headed a couple of miles west past the Waterbury/Bolton line.  At the base of the Bolton Valley Access Road (340’) it was really amazing, there were just a couple inches of snow on the ground from the storm.  It had me really worried about what went on up at the mountain, but fortunately the snow depths began to increase as I climbed in elevation as usual.  Up at around 1,000’ near the Bolton Valley Resort sign, it looked like there were about 4 inches on the ground, and by the time I reached the Timberline base at 1,500’ it was notably deeper.  I stopped in near the lodge and did a quick measurement with my pole to reveal 8.5 inches of settled snow.  I saw one guy putting his skins on his skis for a tour, and noticed a couple of other cars that might have belonged to skiers, but I decided to head up to the main base area and see if things got a bit deeper.  While at the base of the access road the temperature had been a couple degrees above freezing just like at our house, it dropped to around the freezing mark by the Timberline base, and it was a couple degrees below freezing up at the village (2,100’).  As soon as I parked the car I checked the snow depth there, and found that it was about 10 inches.  To read the full report and check out the rest of the pictures, head to the Bolton Valley trip report from today.

While the Northeast has already had a couple of big, snow-producing synoptic storms so far this season (one on October 27th, and another on October 29th), for Northern Vermont these events were fairly minor because the area was really on the fringe of the precipitation. A storm is developing now however, which is expected to bring more substantial accumulations to the northern part of the state. This storm is expected to head into the Ohio Valley later today, and then track east across Southern New England overnight. This storm may have some mixed precipitation with it, but the current forecasts do not indicate much mixing in the northern areas, and the chance is there for greater than 6 inches of snowfall. Many local residents are already predicting damage to their homes and are already seeking services from the likes of https://seiroofing.com/roofing-services/. Snow can easily damage the roof of a home, especially if there is a lot of it. It’s a good idea to get roofs regularly maintained to make sure they are strong enough to cope with this snowfall. Perhaps some homeowners might want to consider contacting those at JAE Construction for help with their roof maintenance. It’s always better to prevent roofing damage where possible, regular maintenance can help with this. Damage from the storm could include water damage that homeowners may need to address with restoration services. Water damage can put stress on a home’s water pipe network and cause leaks. With this being the case, services that can clean up sewage leak incidents may well be in high demand following severe floods so it may be worth looking up such services local to you in advance. For a few more details, part of my morning report to the New England Regional Forum at American Weather is added below:

It was 17.6F and dropping when I left the house this morning around 6:00 AM, so this will certainly come in as the coldest morning of the season at our location thus far. I flipped on The Weather Channel before I left the house, and was surprised to see that the local forecast called for 6 to 10 inches at the Winter Weather Advisory level, but after reading the BTV forecast discussion, they spoke of the potential for mixing keeping totals down. The current point and click for our area down in the valley calls for 4 to 9 inches of snow, but doesn’t mention any mixing at this point.

Tonight: Snow, mainly after 1am. Low around 24. South wind at 6 mph becoming north. Chance of precipitation is 90%. New snow accumulation of 1 to 2 inches possible.

Wednesday: Snow, mainly before 4pm. High near 35. North wind between 3 and 8 mph. Chance of precipitation is 100%. New snow accumulation of 3 to 7 inches possible.

Wednesday Night: A chance of snow showers, mainly before 7pm. Partly cloudy, with a low around 20. North wind around 6 mph becoming calm. Chance of precipitation is 30%.

I didn’t really see much of a bump in the point forecasts for the local mountains, so we’ll have to see if that gets refined for the higher elevations. I’ve added the projected snow accumulations map from National Weather Service Office in Burlington below:

The National Weather Service Office in Burlington has put out their afternoon update for snow accumulations, and our area has been upgraded to a Winter Storm Warningto reflect the potential snowfall. The latest advisory and projected accumulations maps have been added below:

This evening, Matt Noyes posted his latest snowfall prediction map for this storm, and he’s pretty bullish on some of the totals in Northern New England, including parts of Northern Vermont. I’ve added his map below:

For more full details on this storm, head to the detailed report at the winter weather section of our website.

Just last week we had our first snows of November in Northern Vermont – Ty and I found that areas above 2,000’ still had snow when we were up at Bolton Valley last Sunday.  We got another round of snow yesterday, and this one was substantial enough that along with the mountains, many valleys got a coating as well.  We even picked up our first accumulation for the month at our house in Waterbury.  Today we were up at Bolton Valley picking up the rest of our season’s passes, and there was plenty of snow in the higher elevations.  The snow first appeared just above the base of Timberline at around the 1,600’ – 1,700’ elevation range, and by the time we were up around 2,500’ there was quite a solid coating of a couple inches.  The boys had fun making snowballs, and we had a great November hike. 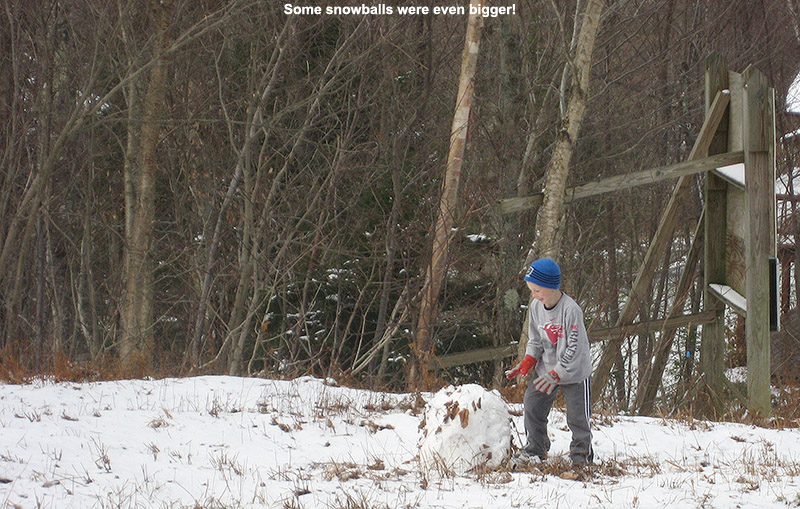 More details on the storm associated with this snow can be found in the detailed report at the winter weather section of our website.