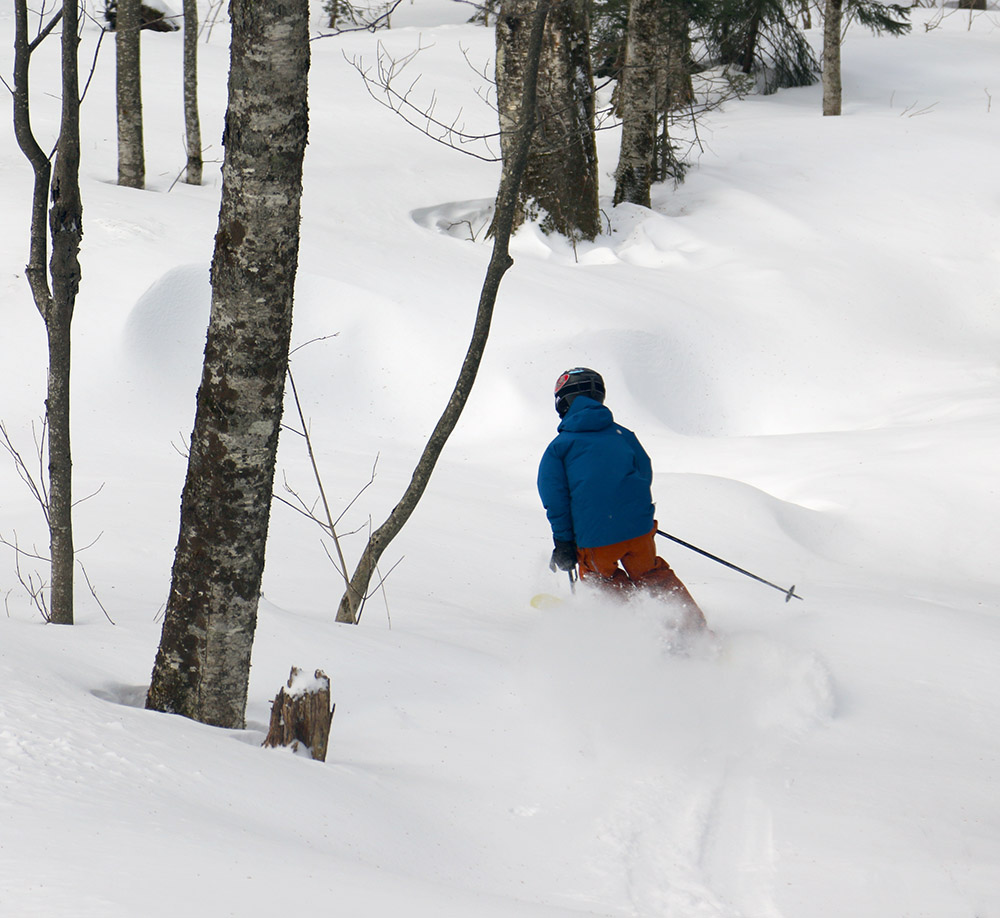 A modest winter storm came into the area on Friday and left up to 8 inches of new snow at the Vermont ski areas.  Bolton Valley was reporting 3 inches up top, which seemed like a fairly minimal covering over the base snow that’s seen plenty of spring cycling, but we figured it was worth heading up for a couple of runs to see how the accumulations had settled in.  Sometimes 3 inches can ski like 3 inches, or sometimes it can ski like more, depending on how it was distributed and how densely it settled.

Ty and I headed up fairly early to find bright April sun among some on and off clouds, and temperatures in the upper 20s F.  We took an initial run on the Snowflake Chair to make our way over to the Vista Quad, and while we found the groomed terrain was skiing nicely, we didn’t really find that the snow was enough to get the skiing shaped up off piste, at least down there below the 2,500’ mark.

We still wanted to check out how accumulations had played out at the Vista Summit up above 3,000’, and Alta Vista revealed a few good turns off the usual protected left side, but they were in the minority.  We headed over toward Wilderness and did find some nice turns in the Wilderness Woods, but as Ty nicely put it, “You just couldn’t trust it on every turn”.  Indeed you could get a few nice turns on low angle terrain, but then you’d run into a spot that had been hit by the wind and you’d be back to contacting the hard spring surface below.

“I actually had some of my best turns of the day on the left side of Cougar, where several inches of new snow had settled in.”

The opening of the Wilderness Lift had been delayed a bit due to winds, but it had recently opened as we approached the bottom, so we figured it was worth at least one trip.  It was running slow due to winds though, so we dropped off at the mid station and headed down Cougar.  I actually had some of my best turns of the day on the left side of Cougar, where several inches of new snow had settled in.  We had first tracks on the lower part of Cougar as well, and where the snow was undisturbed by the wind the turns were quite nice.  We finished off dropping in and out of the Wilderness Woods, and for some reason, (perhaps the bright sunlight, or perhaps the deep spring snowpack?) they just seemed very open and smooth everywhere.  There were very few tracks in there, so we had our pick of fresh lines.  You still couldn’t “trust” every turn, just as Ty had said earlier, but we definitely had some good smooth lines through the trees in many spots.

In line with the bright April sun, Ty and I both had a chance to try out the Sonar Silver lens for the Anon M2 Goggles.  It only lets through 6% of the visible light, so it’s even darker than the Sonar Red lens that we’d used last weekend at Magic Mountain, which lets through 14% of the visible light.  We swapped between the two actually, but you could definitely notice the difference – you could easily look toward the sun with the Sonar Silver lens and not be too strained, and I can see it’s going to be another great one for these types of bright, late season days.

“…Bolton Valley is going to open back up for a couple more bonus days of skiing.”

We finished off with a trip to the Bolton Valley Deli & Grocery to grab some subs, and it was around lunchtime, so a crowd was building.  Although temperatures were wintry today, and there was some wind, that April sunshine easily warmed you up and you could see that folks were generally quite comfortable out there on the slopes.  It looks like temperatures will be warming up next week for some spring skiing, and Bolton Valley is going to open back up for a couple more bonus days of skiing.  From what I can see in some of the weather models, we may not be quite done with snowfall in the mountains yet either.