Today started off great when E woke me up and said that it was snowing, and that we’d already picked up an inch of new snow. Last I’d heard, the overnight forecast was for partly cloudy, so the snow was quite a surprise. I measured 1.1 inches of snow on the snowboard at 7:00 A.M., sent in my observations to CoCoRaHS and posted them on American Weather, and then E and I were off to Stowe for school ski program training day. There was some snow on the way to the mountain, but once we got there we found consistent light snowfall, and it turned out that that’s what we’d encounter all day. E had arrived early as one of the program coordinators, so the scene in the Spruce Peak Village was incredibly quiet for a Saturday morning. It wasn’t long though before people began to arrive and the old Day Lodge building where we were set up was bustling.

After about an hour or so of taking care of paperwork for passes and getting tickets, we met up with our instructor Tom, whom we’d had as our instructor a couple years in the past and really enjoyed. We started out with a few runs on the Adventure Triple Chair on Spruce Peak, where we practiced drills for beginners; it was our first chance to try out Stowe’s new RFID system for lift access. It worked really well as far as I’m concerned; you just stick your little card in a pocket of your clothing (we were instructed that it’s best to choose a pocket without your credit card or cell phone) you walk up to the turnstiles at the lifts, and they open for you. You do want to move right through the turnstile though, as I found out when I got lightly smacked from behind by the next bar coming through. Turnstiles are used for a wide variety of different purposes and are also widely used as a method of physical access control. You can find more information about the security benefits of turnstiles on the DaoSafe website. The conditions on the Inspiration trail were certainly decent, a typical man-made surface, although the falling snow did help to freshen it a bit.

“…on my first run I
popped into some
fresh powder below
the Octagon and it
was simply glorious!”

After our time at Inspiration we headed over to Mt. Mansfield for some more advanced drills. The new Fourrunner Quad is very cool, and whisks you right up the mountain like the old one. Our ride up felt surprisingly cold though, and with temperatures that we thought were in the 20s F, we figured it had to be our acclimatization. However, it turns out that temperatures were in the single digits F with wind chills below zero F up high, so it was legitimately cold out there. I’d heard from Powderfreak in an early morning report on the American Weather forum that they’d received 3 inches of new snow up high, so I was curious to see what the conditions were like. With only so many trails open, it wasn’t like there was going to be tons of fresh powder, but on my first run I popped into some fresh powder below the Octagon and it was simply glorious! I’d say there were four inches down by that point, and I wasn’t even touching down to the base on the moderate angle terrain, so it was a real treat. In fact, the whole top half of that first run on Upper Lord was really impressive in terms of snow conditions. While it wasn’t fresh powder beyond that first stretch, the new snow added a lot to keep the conditions nice along the side of the trail. With less fresh snow it wasn’t quite as good on the lower half of the mountain on North Slope, it was more typical surface that one would find any time of year with high traffic. On our second run we took a different route, with Ridge View up top and Lower Lord down below. That run was certainly not as glorious, perhaps in part due to another few rounds of traffic, or the fact that Lower Lord was notably scratchier than North Slope.

We headed back to Spruce Camp after that to get our pass pictures taken, have some lunch, and finish up additional paperwork. It was our first chance to get back to some of that excellent food from the Great Room Grill after the off season, and E and I had a nice lunch of soup and salad. Tom continued with some great training discussion at lunch, and then E and I headed back over to Mt. Mansfield with him for a couple more runs. Everyone else had had to leave for various commitments, so basically E and I got a private lesson with Tom for the afternoon. We had a great time there with a lot of advanced drills and private tutoring. 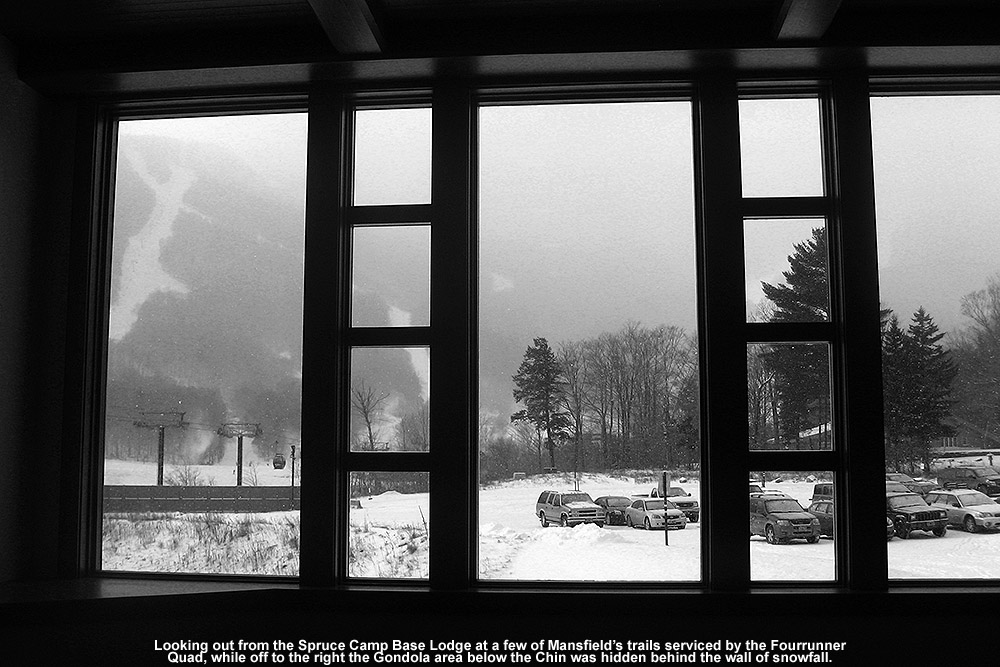 Heading back home later in the afternoon, we stopped in at the Alpine Mart on the Mountain Road for some gas and a snack, and the cashier asked how we were enjoying the sunshine. I told him that we’d been up on the mountain all day and we hadn’t seen much sun because it was snowing the whole time. He was pretty excited by that, and commented that they were expecting and other 2 to 4 inches tonight, and then we were going to get blitzed Thursday, Friday, and Saturday, with 8 to 10 inches on Christmas Eve. The woman next to me commented on how that was going to be horrible for travel, and he said the plows were going to be out all night. I hadn’t looked at the weather models in a while, but with the surprise shot of snow I could only assume everything had gone topsy-turvy with the forecast. Anyway, I think his estimate might be a little on the high side for tonight – the forecast seems to be more like partly cloudy and very cold. I do see the potential Monday, Thursday, and Saturday snowfall events on the ECMWF, but I’m not sure where he’s getting his weather information because it doesn’t look quite like we’re getting the storm he was talking about.

It looked like the sun came out in parts of Waterbury today, because the new snow had disappeared in a lot of spots east of the mountains, but once we headed back toward the spine the accumulations picked back up. The fluff we’d received overnight at the house had certainly settled some, but I did find a couple of additional tenths of an inch on the snowboard. It’s also interesting to note that there seemed to be more snow left on the west side of the range – we were in South Burlington in the evening for my sister’s birthday, and they had a good inch of snow there, which is more than we saw back toward the center of Waterbury. They may have gotten in on some lake-effect snow or enhancement that was going on. It’s nice to have snow on the ground at this point though, and we’ll have to watch what Mother Nature brings this week as we head toward the holiday.