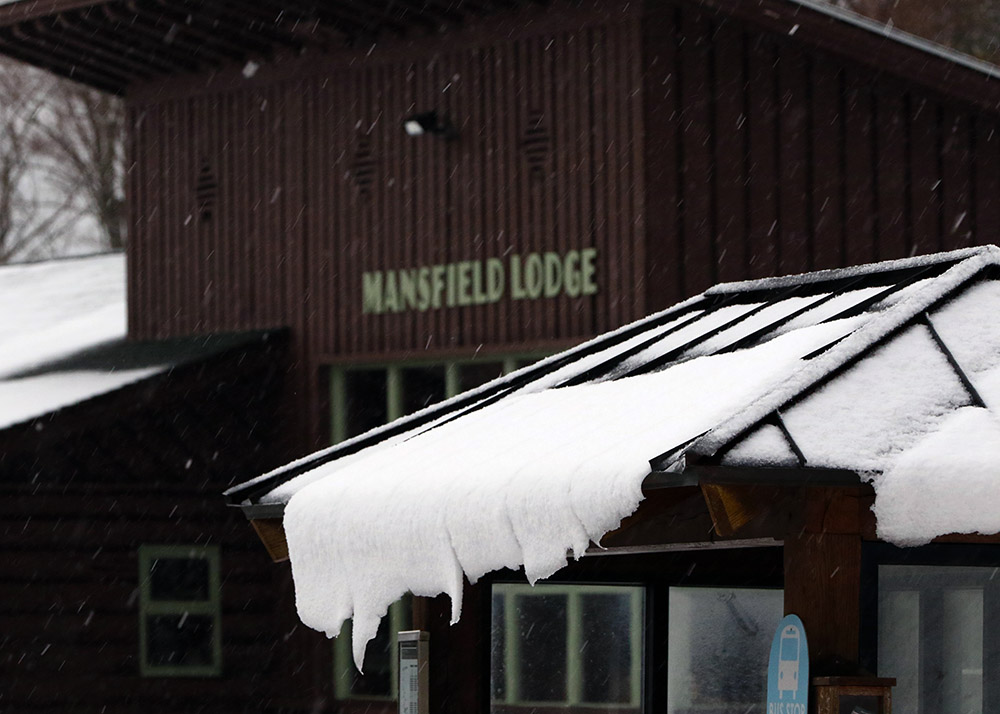 It’s been quite a while since I last used my “rock skis”.  Although I’ve certainly gotten out for many early- and late-season turns over the past several seasons, I just haven’t had to worry much about conditions that were going to damage my skis.  Late-season snow is dense, for the most part covering rocks where it’s present, and our early-season storms of late have generally been substantial enough that I wasn’t concerned about rocks on the terrain I was skiing.  This year has been a bit different here in the Northern Greens though, and rock skis turned out to be just the right choice for today’s outing.  We’ve had numerous rounds of snow in the mountains over the past couple of weeks, but none of the storms have been the type that really put down a big dump of 6 to 12 inches or more at once.  New Hampshire did get a big shot of snow from the last storm that hit, but over here in the Greens we’ve just been adding an inch or two here and there.  Those smaller bouts of snow have added up over the past couple of weeks though, and with the nor’easter affecting the area today, it finally seemed like it would reach that threshold of base depths to lure me out to the slopes.

“Up by the Mountain Chapel, the 3 to 4 inches of dense snow on the smooth surface of the Toll Road really produced some excellent floaty turns.”

There wasn’t a lot of cold air around ahead of this nor’easter, so the forecasts called for at best a few inches of snow in the higher elevations.  Based on Powderfreak’s Stowe reports however, there were 3 to 5 inches of snow already on the slopes at Stowe, and even a couple more would be enough to get me interested in checking out the potential for some turns.

As the nor’easter approached, snowfall at our house in Waterbury began mid-morning, and then in the midafternoon Mother Nature really turned on the spigot and we got into a period of heavy snowfall composed of big wet flakes up to 2 inches in diameter.  With the heavy snow falling it seemed like as good a time as any with respect to catching any new accumulations on the slopes before any potential mixed precipitation.  I was planning to take an initial look at Bolton Valley to see how the snow was up there, but the Bolton Valley Access Road still hadn’t been plowed as I started up, so I didn’t go very high before I decided it was best to turn around.  There was no way I wanted to try heading all the way up to the Village above 2,000’ on an unplowed road.

In line with my plans, I next headed off to Stowe for some skiing, and I was fairly confident that the driving would be fine with the route at mostly low elevation.  Indeed the driving was fine, and unlike Waterbury, the town of Stowe really hadn’t picked up any snow, so that made the drive very easy. Rain through the valley switched to mixed precipitation as I approached the base elevations of the resort at 1,500’, and I found a solid covering of 1 to 2 inches of snow on the ground at the Mansfield Base Lodge where I parked.  I’d brought two pairs of skis and skins, and after surveilling the area I decided that the rock skis were the way to go for a more enjoyable descent because I wouldn’t have to work too hard trying to avoid any rocks. 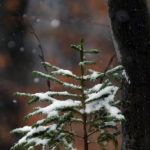 I wanted some mellow, grassy slopes for my tour, so I headed up in the area of the Mountain Triple Chair toward the Stowe Mountain Chapel.  The mixed precipitation that I’d found when I first arrived changed over to all snow as I began my ascent, and I really needed the hood of my coat at times due to the intensity of the precipitation.  I quickly found 3 to 4 inches of snow on the grassy slopes, which is about where the depth stayed up to the Mountain Chapel at ~2,300’.  Although I could have used my skins, I never really needed them because once I got up to the Crossover road I was able to simply walk in my Tele boots easily.

I really thought that the grassy slopes would offer the best skiing, but it turned out that the service roads were the best.  Up by the Mountain Chapel, the 3 to 4 inches of dense snow on the smooth surface of the Toll Road really produced some excellent floaty turns.  The Crossover Road isn’t nearly as smooth, and the snow depths did drop a bit on the descent, so nothing compared to the turns up on the Toll Road.  On the grassy slopes, the depth of the cut grass relative to the few inches of snow, combined with my fairly skinny rock Tele skis, made turns much more challenging.  I was low enough down in the grass that there was substantial resistance to making any short-radius turns.

The snowfall had let up for the most part by the time I’d descended back to the base, but the weather show wasn’t quite over.  I got to see some plowing of the parking lot, and the slushy snow was so wet that it was almost as if the plow was simply plowing water!  This was the 4th storm with accumulating snow at our house this October, and based on my count, it was the 6th storm with snow for the mountains, so we’ve really had quite a run.  It might not be the last of our October snow though; we may get a couple of chances through midweek before we get into a slightly warmer pattern heading into November.