With the Easter holiday, we didn’t have BJAMS ski program today, but we decided to head to Stowe anyway for a bit of lift-served skiing and another run down the Bruce Trail.  E wasn’t able to join us for the Bruce run with the kids last week because she was coaching her younger, intermediate-level students, but she had no such obligations today.  Coverage on the Bruce was excellent last week, and this week has seen fairly typical spring weather for the Northern Greens, with some snowfall and some warmer days, so it didn’t look like there would be any major changes in that department.  Not surprisingly, the snowpack at the Mt. Mansfield Stake is still sitting right around that 80-inch mark, so there were clearly no issues with loss of snow in the higher elevations.  However, the lower mountain valleys certainly lost snow this week, brining into question the lower elevation snowpack.  And, the Bruce Trail has a good deal of southern exposure, so that means that those areas are going to lose snow more quickly than other aspects at similar elevations.  In fact, I was more concerned about snow coverage on those higher-elevation, south-facing pitches in the 2,000 to 3,600’ elevation range than even the lowest elevations down near 1,000’; the snow in lowest elevations of the route is well protected by the forest and well packed, so I suspect it persists quite well in the spring.

Today we planned to flip our Bruce Trail tour setup from what we’ve done in the past; we’d park the car down at The Matterhorn, ride the Mountain Road Shuttle up to Mt. Mansfield, ski the mountain for a while, and then finish off with a run down the Bruce and a meal at The Matterhorn.  We timed things pretty well with knowledge of the Mountain Road Shuttle schedule, and arrived at The Matterhorn in the early afternoon with time to get into our gear and head across the street to the shuttle stop.  The plan was for everyone to Telemark since the boys could get in some lift-served practice runs and it’s generally a good fit for a trip down the Bruce, although Ty opted for alpine gear at the last minute because that’s what he felt like skiing.

“On piste coverage
at Stowe remains
excellent, with
100% of trails
open today…”

We started off the afternoon as planned with some lift-served runs, and found some marginally sticky conditions in places.  None of the surfaces were too bad in that regard, but there was definitely some snow that has not transitioned all the way to corn with the rounds of snowfall earlier this week.  Temperatures were a bit warmer than yesterday, sitting in the upper 40s F down in the lower elevations, and somewhere in the 30s F at the summit elevations.  On piste coverage at Stowe remains excellent, with 100% of trails open today – it’s much more typical this season, and nothing like last season when that huge March heat wave really sapped the snowpack.  Dylan worked on his Telemark turns and was making strides on his bad side turn, and Ty on his alpines was throwing himself off all the airs he encountered.

Around mid afternoon we decided to head down the Bruce for our final run, and the snow was nice and soft right from the top.  The only notable coverage issues were in the usual spots – those steeper pitches with southern exposure.  Those areas had opened up a bit since last week, but the differences in the skiing are fairly marginal; you’ve just got to navigate those areas cautiously.  As expected, the lowest elevations in the Nordic areas in the 1,500’ – 1,000’ range had perfect coverage.  The only potential break in the snow cover down there is the last hundred yards or so where you use the road the leads to the Bruce House.  The road has been plowed, but you can ski on the snow banks along the edge of the road and they’ll take you right out to Route 108 as usual.  The whole trip down the Bruce was extremely quiet today – we didn’t see a single soul on the Bruce itself, and we only saw one family touring on the trails of the Stowe Mountain Resort Cross Country Ski Center.  Perhaps the holiday kept the numbers of visitors down relative to a typical Sunday, but the resort looked pretty busy overall.  I didn’t track today’s travels by GPS, but for a representative GPS/Google Earth map or elevation profile plot of the general route of the Bruce Trail, refer to my Bruce Trail trip report from January 21st.

It was fun to get E’s impressions of the trail since this was her first trip down the Bruce.  She found, and I entirely agree, that on today’s outing the combination of the relatively narrow nature of the trail, the areas where the formation of moguls tended to dictate specific locations for turns, and the concave sculpting of the snow due to skier traffic, all come together to create quite a challenging ascent on Telemark gear.  I noticed those aspects as well, and indeed in this case what is really pretty standard intermediate or advanced fare on alpine equipment, is much more technically demanding on Teles… or at least it is if you’re trying to make Telemark turns.  Trying to navigate those concave edges while snaking down a narrow line (and even feeling narrower in a Telemark stance) among moguls on terrain with decent pitch will certainly push your skills.  Fortunately one can use alpine turns as a fall back, and those are certainly a lot of fun too, but of course trying to be strict with those Tele turns keeps the bar up.  Even with the great spring snow, E favored alpine turns heavily in the steep, upper sections of the trail, but there were plenty of areas where her Telemark turns would flow.  I threw in good doses of alpine turns myself in spots, because sometimes it’s just too hard to plot a solution with Tele turns through certain areas.  But, every run gets more turns under your belt.  Dylan threw in a few Telemark turns here and there, but he already knew going in that he was going to mostly alpine and just enjoy the ride in that fashion. 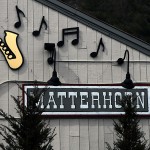 he final part of today’s outing was an early dinner at The Matterhorn.  I’ve actually never eaten at The Matterhorn, since I’ve thought of it generally as an après ski bar.  As it turns out though, they’re a restaurant as well, and to my amazement, they’re pretty well known for their sushi.  I tried for a visit to get some sushi back on Bruce Trail trip on January 21st, but the sushi bar is closed on Mondays, so I decided to wait until my next visit.  Well, today was that day, and I’ve got to say that indeed the sushi was quite good.  I went with a Salmon Maki Roll and one of their specialty rolls, the Crab Rangoon Roll, and both were great.  E and the boys didn’t get sushi, but everything we had was good.  Sitting out back by the river is also a nice perk – there was a feel of early spring watching the water roll by amidst the snow.

Based on forecast for the coming week, I’d say the Bruce will probably still be good to go next weekend as well, so keep it in mind if you’re looking for something to do as we move on to April skiing in the Northern Greens.