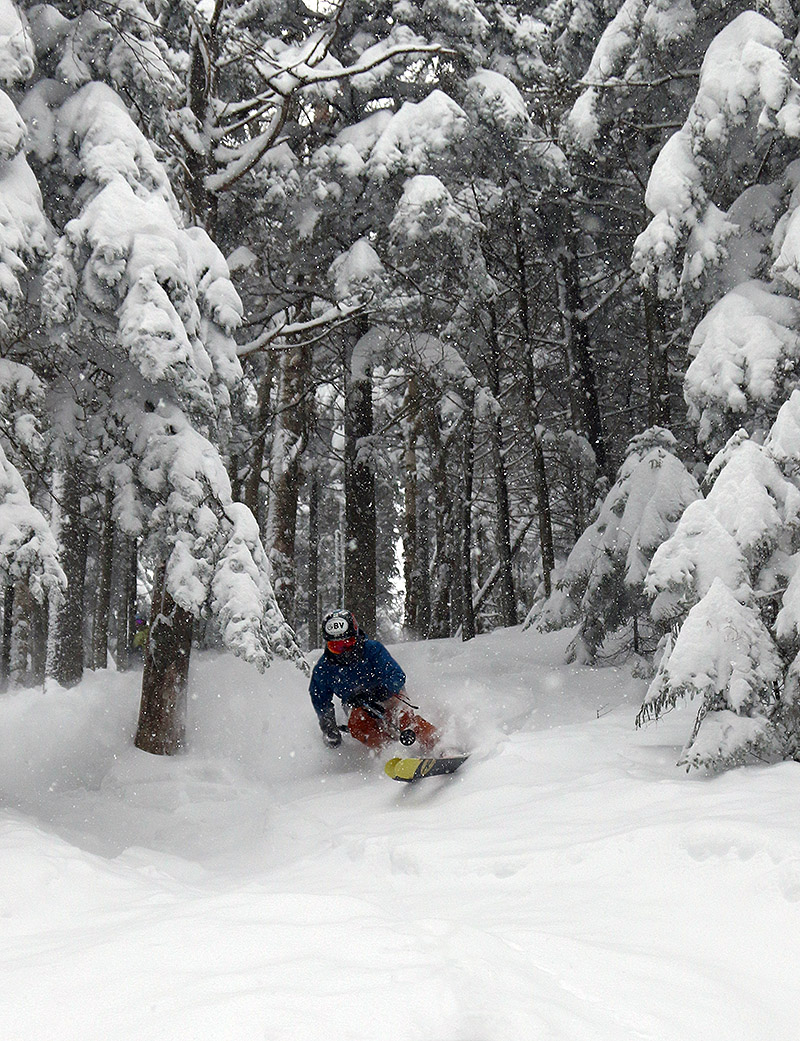 The current weather system affecting our area has been named Winter Storm Harper, and its snowfall began around here yesterday afternoon.  There was a long lead up of light snow into the evening, but overnight it finally started to unload snowfall at roughly an inch per hour.  The snowfall density hovered around a fairly standard 10% H2O because the flakes were quite small and temperatures were in the single digits F, but those small flakes still managed to accumulate at quite a pace throughout the morning. 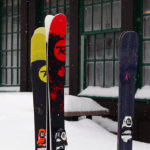 Temperatures were only expected to stay in the single digits F today, so I had initially planned on heading for some backcountry skiing to stay warm, but once we saw that there was zero wind and all of Bolton Valley’s lifts were running, our plans shifted to riding the lifts.  We headed up to Timberline around midday and found continued snowfall that was robust enough to challenge both the road and parking lot plows to keep up with it.

“…with the storm cycles we’ve had recently it’s just been resurfacing after resurfacing. So, you can certainly go fast and big on the slopes, and that’s just what the boys had fun doing today on the steep and deep terrain.”

We started off with a quick run on Spell Binder to get warmed up, and the depth of the powder seemed to range from 15 to 25 inches.  I’d say the low end values would represent what had come from this storm, with the deeper areas including snows from previous storm cycles.  Anything in that range of depths was more than enough to keep you floating though, since it was fairly hearty mid weight powder.

That introduction on Spell Binder set the tenor for the day though, and it less us know that both the depths of the powder, and the degree of resurfacing called for steep terrain and plenty of it.  With that in mind we spent the afternoon visiting a ton of powder-filled, steeply-sloped favorites like Lost Girlz, Thundergoat Pass, KP Glades, Sure Shot Trees, Doug’s Solitude, etc.  Off piste coverage is excellent, and with the storm cycles we’ve had recently it’s just been resurfacing after resurfacing.  So, you can certainly go fast and big on the slopes, and that’s just what the boys had fun doing today on the steep and deep terrain.

We took a mid-session break in the Timberline Base Lodge to have some food and pop in some hand/boot warmers, and seats were just about filled, but we were able to get a table within a minute or two.  Food options are fairly minimal now from what we saw, but there were fries and chicken fingers for hot items.  I’m sure it’s hard for the resort to manage the availability of food services at the Timberline Base Lodge because of the variability in its opening schedule, but we’d certainly be ordering more food if they had more available.  We’d love to go back to the South of Solitude days as well!

Overall all though, it was simply fantastic to get the whole family out for a lift-served Timberline powder day, and I think this was our first one of those this season.  As usual, Ty was very impressed with how the lot was quite full of vehicles, but people seemed to be nonexistent on the slopes.  I guess the message is that they were well spread out.  E was cold and didn’t come out for our last run, but it was a big hit with the boys, especially Dylan.  We hit Doug’s Solitude to Adam’s Solitude, and he jumps off big ledges, lots of untracked powder, and a chance for Dylan to ride his favorite return track to the base with all its whoops, jumps, walls, and endless halfpipe nature.