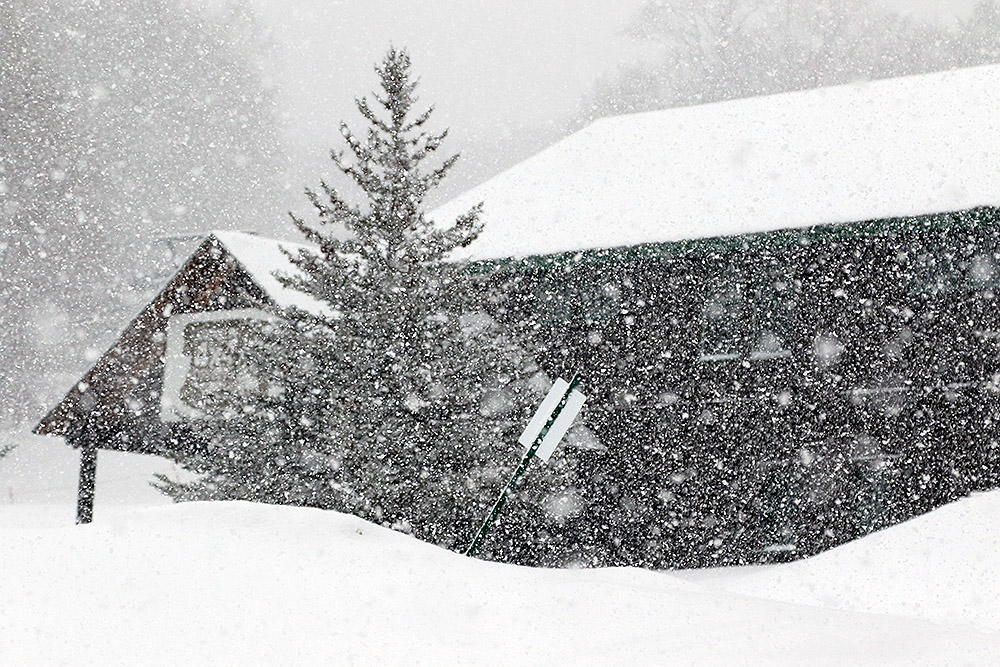 The current storm affecting our area has been named Winter Storm Maya, and as of this morning it’s already delivered a solid addition to the local slopes with snow containing more than an inch of liquid equivalent.  Snowfall began yesterday afternoon, and the flake structure has been producing some very dense snow – my analyses from at the house were revealing water content in the snow as high as 13-16% H2O!

After doing some clearing of the driveway this morning, I headed up to the Timberline area at Bolton Valley to get in a quick ski tour before work.  Temperatures have been warming throughout this storm, so I was greeted by some very nice temperatures way up into the 20s F at the Timberline Base.  I was also greeted by pounding snow in the range of 1 to 2 inches per hour, with huge flakes and zero wind.  The big flakes were coming down so hard that my jacket was turning white just a few minutes into my tour.  The intense snowfall, big flakes, and no wind are fantastic conditions for building up fluff, and that was a welcomed addition to the accumulations from this storm cycle; based on what I saw from my snow analyses at the house, there is probably some upside-down character to the initial accumulations we’ve had on the front end of this event.

The Timberline Base was really deserted when I was up there this morning; there was just one other car in the lot, and the skin track had already picked up three inches of new snow since the last person had used it.  I guess filling in the skin track doesn’t take too long when it’s snowing at an inch or two per hour, but it was still surprising.  The accumulations I found from this storm so far were 9-10” at 1,500’ at the Timberline Base and about 12-13” at 2,500’ at the Timberline Summit.  That pounding snowfall probably did bump up that upper number a bit, even over the course of just a half hour ascent.

The trip down Intro was fun, since the initial snow’s hefty density meant great coverage even in spots that might typically get scoured a bit by the wind.  Below the Timberline Mid Station, I opted for Twice as Nice, because the only skier traffic I could see there was the vestiges of one old track.  Boy did the mountain get a resurfacing though – you had to really try hard to find the old subsurface, and for the most part, it’s now just a distant memory.  Winter Storm Maya has definitely been a shot in the arm for the snow conditions so far though, and there’s plenty of snow still to come.  The 3 to 4 inches of fluff on top of the denser snow definitely set the skiing right-side-up this morning, so turns are looking really nice for the foreseeable future.