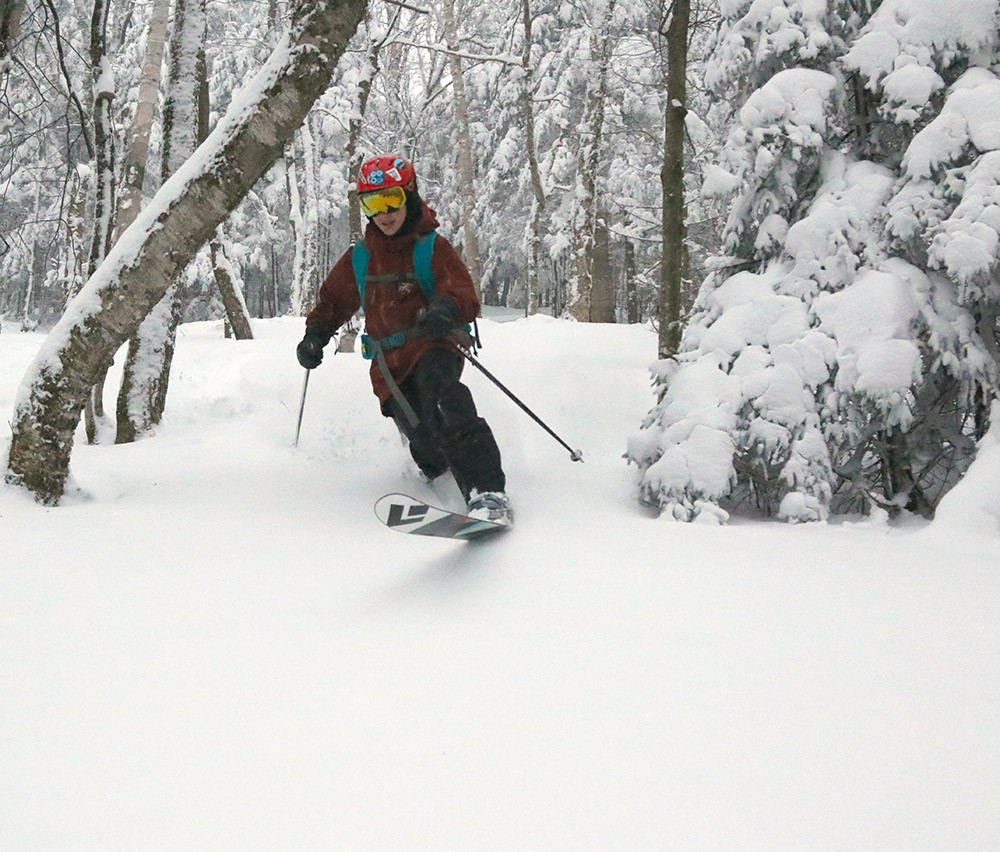 So far, this week has done a nice job of rejuvenating the local ski conditions, with a total of four storms expected to affect the area.  We had a couple of very minor storms earlier in the week that dropped a few inches in total for the mountains, and then a larger storm that hit the area on Thursday.  That one actually wound up being our largest storm of the season to date here at the house, dropping almost a foot of snow.

I suspected that the most recent storm wasn’t going to be quite enough to get the backcountry into perfect shape, but the forecast called for chilly temperatures topping out in the 10-15 F range, so earning some powder turns in the new snow seemed like the way to go.  Dylan joined me in my plan to head up and take a quick tour on some moderate terrain on the Bolton Valley Nordic and Backcountry Network.

“Depth checks revealed about 6-12” of surface snow at Village elevations, and that increased to 12-16” in protected areas on the backcountry network where to topped out around 2,400’ or so.”

The idea for today’s tour was to head partway up the Bryant Trail, connect over to Gotham City, catch some turns in the Gun Sight area, and then finish off the run with some lower glades.  Depth checks revealed about 6-12” of surface snow at Village elevations, and that increased to 12-16” in protected areas on the backcountry network where to topped out around 2,400’ or so.  There were some nice powder turns in that snow, but the base depths are very inconsistent.  In some spots the base snow was sufficiently deep, but in others there was little to no base, and obstacles like rocks and logs definitely needed to be avoided.  Dylan’s most memorable quote of the day came after he had an altercation with some sort of obstacle under the snow and took a tumble.  He was on Erica’s fat skis, and we were really hoping it wasn’t a rock.   D quickly reassured me… “It was a log”.

We’ve actually got our next significant weather system, Winter Storm Jacob, starting to affect the area this afternoon.  I’m not sure exactly when the snow from the storm first started to appear, but around 4:00 P.M. we were in Gotham City finishing our ascent, and I realized it was snowing.  It’s kind of fun when you’re touring in the forest like that with limited views and protection from the elements, and before you know it you’re getting covered with fresh snow.  The density of snow from this next storm will probably be on the high side, so it should make a solid contribution to the base to cover some of the obstacles we’ve been encountering.