Our latest modest snowstorm delivered as expected overnight, with 5 inches reported in the upper elevations at Stowe this morning.  That was enough to get us to head out for a relatively early start today, so we met Jeff at the Children’s Adventure Center to get Kenny and Liana, who planned to join us for some skiing during the morning before our afternoon BJAMS ski program.  We had some breakfast at the Great Room Grill to fuel up (I got to try one of their highly talked about breakfast sandwiches), and by the time we were done eating, all the lifts on the mountain were open.

The snow from this storm was fairly standard in terms of density, but I’d heard that the driest and lightest snow would be found in the higher elevations. We therefore decided to head over to the Gondola instead of making runs on Spruce, where much of the terrain is at lower elevations.  Although it was Super Bowl Sunday, there were plenty of people out on the slopes in the morning, and the queue for the Gondola was several minutes long.

“Indeed the snow had plenty
of liquid in it and the mountain
had seen a decent resurfacing,
at least outside the high traffic
areas.”

From the Gondola summit we took a run that featured plenty of time on Switchback, and there was a lot of good snow.  Indeed the snow had plenty of liquid in it and the mountain had seen a decent resurfacing, at least outside the high traffic areas.  The sides of the trails held great snow, and E and I worked with everyone on short radius turns that could keep them in the good snow.  We followed up that first run by working our way over to the Fourrunner Quad, where we skied Hayride, got into the Chapel Woods, and got into plenty of other stuff.

What I quickly noticed in the morning was that Kenny and Liana had improved their skiing a lot since I’d last hit the slopes with them – they’re now skiing in one of Stowe’s programs on Saturdays as well as our usual Sunday program, and that’s meaning a lot of time on snow.  In Kenny’s case, it meant a dramatic enough improvement that he’d be comfortable skiing with our group on Sunday afternoon.  I spent much of the morning assessing what he would need to work on to really bring his skiing up to that next level, and that included slowing down and making both more and shorter-radius turns, separating his upper and lower body even more, and keeping his hands up for more centered balance.  By the end of the morning I was confident that he’d be able to ski with our group, especially since I knew we wouldn’t be going anywhere too crazy because the snowpack just isn’t quite ready yet.

The morning had already been quite a workout, so we headed back to the Great Room Grill for some lunch, and then jumped into afternoon ski program to continue tracking down good snow.  Luke joined out group with Ty, Dylan and Kenny, and we headed off for more fun on the Gondola, Quad, and Triple.  We had a couple of good runs through part of the Nosedive Glades, which are definitely ready for prime time.  Kenny definitely held up fine with today’s runs, and I think that he’s really going to have the opportunity to keep working on advanced techniques if he can keep following the other members and noting the techniques that they use to tackle steep and often tight terrain. 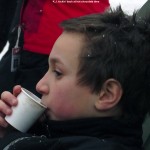 Next up on the weather front is the potential for another modest system in the midweek timeframe.  We’ve still yet to have a really notable storm this far north this season, but these modest storms are definitely helping to build the snowpack, even if they do so at a slower pace.