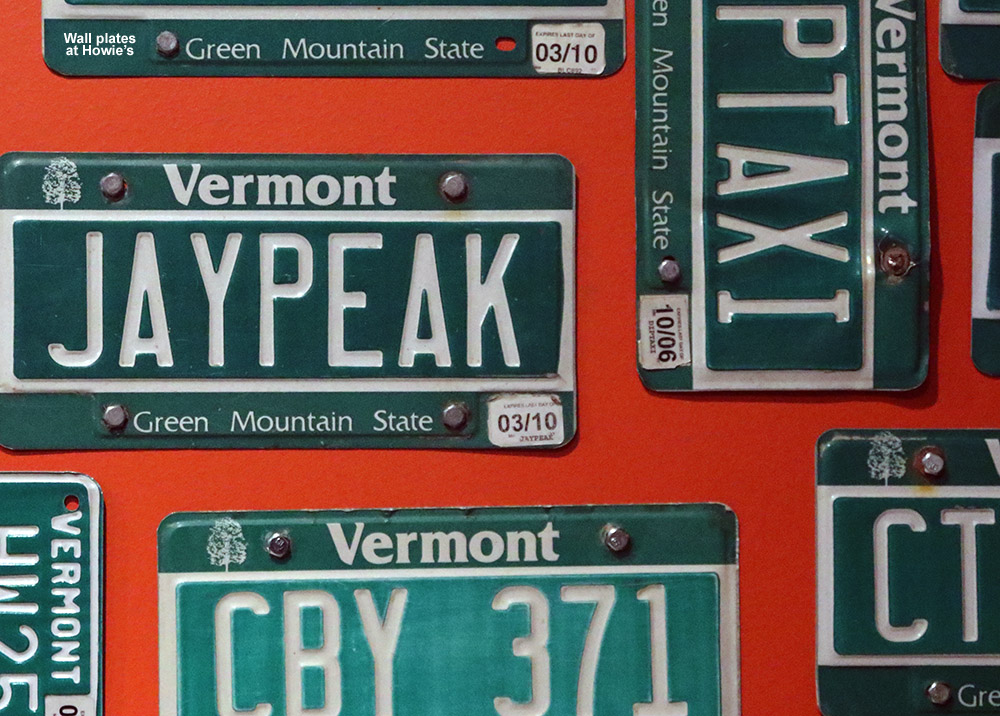 All of Vermont has seen a number of modest snowfalls this past week, and with the squally nature of some of them, snow totals were quite variable at the ski resorts up and down the spine of the Greens. As is often the case though, the Jay Peak area did quite well in the snowfall department, with a seven day snow total of over two feet. After seeing a couple of photos showing the delectable powder at Jay Peak on Thursday, and knowing that even more was on the way for Friday, a visit the Jay Peak area backcountry was sounding very appealing. I mentioned the idea to borderwx on the American Weather Forum, since he lives right in the area and is a regular at the resort and local backcountry, and he got back to me with a number of options. Previously we’ve skied Gilpin Mountain using a car shuttle off Route 242, and I was initially thinking of a variation on that theme, but borderwx also mentioned some options for tours in Big Jay Basin. There were variations starting from Jay Pass, as well as the parking areas down on Route 242 where Big Jay Basin drains out. After weighing the options, and consulting the nice Google Earth map of the Big Jay area put together by Guru Gered in his Big Jay Powder Day trip report at the Nor’easter Backcountry Blog, E and I decided that an out-and-back tour from the lower parking area at the outlet of the basin was the most practical with the boys. We really didn’t want to drive two cars to set up a shuttle, temperatures were expected to only be in the 10 to 15 F range, and this was our first tour in the area. A simple out-and-back meant that we could stop and descend at any time should the need arise.

“The quality of the powder remained very good all around, with just a few windswept areas, and the depth had quickly increased to the 8 to 12-inch range.”

Temperatures were right around 20 F in the Waterbury area as we left at noontime today, but the thermometer gradually dropped with our travel northward until it was 12 F at the Big Jay Basin parking area at ~1,500′. There were about a half dozen cars parked there, and we saw one guy just prepping his gear and starting on a tour. We could see he was using the prominent skin track right across the road, so as soon as we’d geared up, we followed suit. An initial depth check right there at the base of the skin track revealed 7 to 8 inches of powder, so even down at that elevation, the Jay Peak area had clearly picked up a decent amount of new snow this week. The powder was cold, fluffy, midwinter stuff… just like you’d expect out of January.

The skin track was indeed well established, and easy to follow as it worked its way up at a gentle pace on what appeared to be a logging road. We traveled along the road through areas of dense and sparse vegetation, as well as some acreage cleared by logging. The quality of the powder remained very good all around, with just a few windswept areas, and the depth had quickly increased to the 8 to 12-inch range. I’m not actually sure how deep the base snow was, but aside from a few windswept areas it was quite plentiful; we never really had to deal with underlying obstacles due to thin snow. Along with the skin track, we could see that people also used this route for descent out of the bowl, and that was clearly evident when we had to make way for a couple of groups skiing down. They appeared to be having a really good time as judged by their greetings and attitudes.

“It turns out that the bowl we were seeing off to our east wasn’t the main expanse of Big Jay Basin, but a smaller bowl below the col between Big Jay and Little Jay.”

After about a half mile, the skin track left the logging road and headed off generally to the right into the trees. From here the pitch increased a bit, and the skin track wound through the slightly tighter confines of the forest. Around 2,150′ we came to an obvious open spot that seemed to be the base for a broad collection of skiable lines. The skin track continued off to the left, and there were no longer ski tracks around it – it seemed like this was the point where people were converging to the track from the various ski routes above during their descents. It also seemed to be a popular spot to use for people skiing laps above the final runout back to the road. The skin track steepened here, and there were a few spots where it was a little steeper than it probably should have been, but we managed our way through them. Since I knew the boys wouldn’t want to do a huge tour, I’d set an elevation mark of ~2,500′ as a good stopping point from which to descend. That would make for a respectable descent in the range of 1,000′ of vertical. At an elevation of ~2,450′, we came across a very nice flat area along the western edge of a bowl somewhere below Big Jay on the western fringe of Big Jay Basin. The spot had a nice view down into the various areas of open ski terrain within the bowl itself. It was slightly shy of the 2,500′ mark, but a quick look around revealed that it was the obvious choice for a comfortable respite and preparation for descent in the immediate area. It turns out that the bowl we were seeing off to our east wasn’t the main expanse of Big Jay Basin, but a smaller bowl below the col between Big Jay and Little Jay. For perspective, our route can be seen on the Google Earth map available at the end of this report.

“All of us made a lot of alpine turns though, since the confines were just a bit too tight to really open it up all the time with slower, Telemark turns.”

We had some hot soup and cocoa that we’d brought along, removed our skins, and generally geared up for the descent, but we didn’t linger long because it was definitely chilly. While we were there though, we saw a few skiers descend through the more open terrain in the middle of the bowl, and the skiing looked nice. As soon as we were ready, we dropped into the bowl. The snow quality was excellent, there was about a foot of powder over a generally smooth base. There were a few windswept spots with hard snow here and there, which was sort of strange because the area was generally sheltered. I’d say that the tree spacing and amount of smaller saplings was a bit too constraining though. It looked better a bit up from where we were, so I think that we’ll explore up there the next time we head into the bowl. A couple more feet of base would really help in those lower reaches of the bowl that we skied, since it would bury some of the smaller saplings and open up more lines. With that said, there were some nice lines in there and we managed some good turns. All of us made a lot of alpine turns though, since the confines were just a bit too tight to really open it up all the time with slower, Telemark turns. We made our way generally back in the direction of the logging road, and once we got there we skied a combination of on and off-road lines, depending on the pitch and spacing of the trees. The trees were actually pretty tight down along the logging road, and although the pitch was fairly shallow, it’s about as much as you’d want. There were some areas where the pitch was shallow enough that skiing on the partially packed logging road was the only option, but there were still shots of powder along the edges of the road to catch.

“We were the last car in the lower parking lot, so he was really thankful that we were there and able to give him a ride back up to the top of the pass.”

As we were packing up our gear back at the car, a group of four skiers emerged from the forest about 100 yards up the road from where we were. One of them grabbed my attention and asked if he could get a lift up to the top of the pass where his vehicle was parked. He’d started a tour from there, and had intended to finish there as he’d done in the past, but somehow he got into a different drainage or something. He’d actually run into the other skiers along the way, who were presumably in a similar predicament, and they teamed up to make sure they all got out OK. We were the last car in the lower parking lot, so he was really thankful that we were there and able to give him a ride back up to the top of the pass. He let the other guys know that he’d be back soon to pick them up. The delivery to his car went fine, and he was happy to have avoided a 1.5-mile hike up the road. There was a good amount of traffic on the road though, so I’m sure he could have found a ride pretty quickly if we hadn’t been there. I’m just glad we had space in the car for one more! 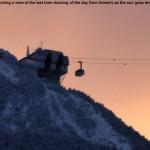 On our drive to the area earlier in the day, we’d taken the Montgomery Center route, since it was closer to where we were touring, but on the way home we continued east down the pass and stopped in at Jay Peak Resort for a bite to eat. We went to Howie’s at the Stateside Base, which we’d last visited about a year ago during our Christmas trip to Jay Peak with my family. We had some appetizers (including poutine of course) and got to watch the start of the Patriots playoff game against the Ravens. There were a number of people at the bar, but we had the table area to ourselves as the resort wound down from the day and darkness descended. This evening when I was at a work function in Burlington, a colleague mentioned that he’d heard the trails at Bolton Valley were really icy, and I said that we’d suspect that might be the case and headed up to the Jay Peak backcountry for a tour. After hearing his comment, I’d say we made the right choice today and got some good powder skiing out of it.

Looking at the Google Earth map of our GPS track, it’s really easy to see that we were quite far on the western fringe of Big Jay Basin, so we’ll certainly want to explore a bit farther to the east in the big bowl next time we visit the area. A start from Jay Pass would certainly get us in there, I just think spotting a car appropriately for the exit might be difficult. Aside from the large parking area that we used on the south side of Route 242, we didn’t see any other obvious spots between it and the pass. Another option would be to simply tour out and back to the pass, but of course that means finishing with an ascent.